Detective 734 – Batman and the Cains

Detective 734 (July 1999) concludes a two-part story by Kilian Plunkett, Damion Scott and John Floyd, which introduces David and Cassandra Cain, a father and daughter assassin team.  This story falls during the No Man’s Land period. 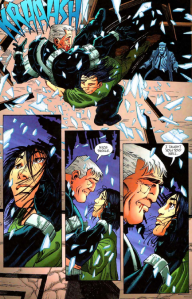 Cain has come to Gotham to fulfill a hit on Jim Gordon.  Barbara has gotten wind of it, and notified Batman.  Cassandra waffles on her loyalties, but chooses to help Batman and stop her father. 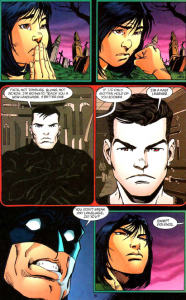 We get a little of her backstory.  She has never been taught to speak, and apparently hasn’t figured it out on her own.  She speaks only a “language of violence” taught her by her father.

Not being able to speak doesn’t cause her much trouble, and it does make the stories she appears in pretty quick reads, but the pair of them have always felt like the father and daughter Al Ghul’s, done lite.

Even still, she prevents Two-Face from doing anything about his plans to have Gordon killed.

She also gets between her father and Batman, preventing them from killing each other.  David Cain escapes, largely because Batman has too much else on his plate to go after him. 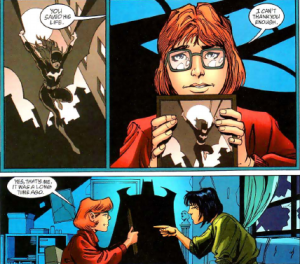 The story ends with Oracle thanking Batman, and Cassandra.  There is a bit with Barbara passing a photo of Batgirl to Cassandra, which is meant to convey Barbara’s acceptance that Cassandra will become the new new Batgirl.

Detective 733 – the crimes of Thomas Wayne