No Man’s Land moves towards its conclusion with Detective 738 (Nov. 99), in a story by Chuck Dixon, with art by Mat Broome and Sean Parsons.  It’s the conclusion of a two-part story.  Are you surprised it’s a concluding half? By now, you should be used to it. 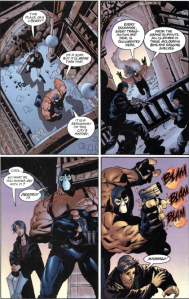 Bane penetrates into the heart of the city – the hall of records.  He sets off a (very) low-grade nuke, which destroys the building and renders the land it is on impossible to build on.

Two-Face also finds himself in trouble, with the Penguin’s men leading an assault against him. Batman and Robin watch both situations unfold.  Robin wonders why Batman does not act to stop Bane.  Batman is more interested in who might be giving Bane the orders to destroy the Hall of Records.  They leave Bane to his bomb, and save Two-Face.