Detective 798 – Tim Drake makes a decision, and the Riddler does as well 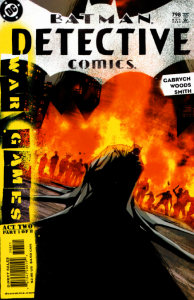 War Games has the first chapter of its second act in Detective 798 (Nov. 04), by Gabrych, Woods and Smith. 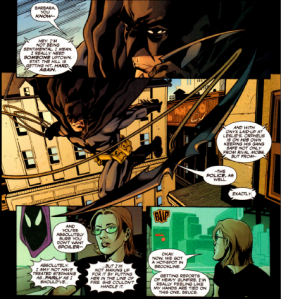 The gang war has turned personal, as the teenaged daughter of one of the mobsters was murdered, and Batman is getting frantic. It doesn’t help that he was captured on television for the first time.  Oracle suggests bringing in Stephanie, as they need more operatives, but Batman, though he regrets how he treated her, does not think Spoiler would be safe.  Neither realizes yet that she is already sooo involved.

The Body Doubles, villains from the old Resurrection Man series, who proved far more popular than the hero, make an appearance in this, shooting Renee Montoya.

Batman meets with Commissioner Akins, asking him to turn the police force over to him, so that Batman can have the men needed to end the gang war, but Akins turns him down cold. 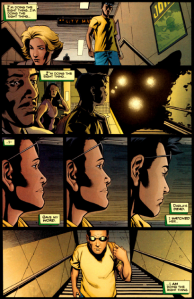 Tim Drake spends a lot of time agonizing in this issue.  He vowed to never become Robin again, after his father’s death. 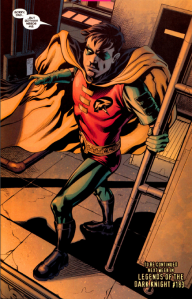 But he knows he is needed, and too many lives are at stake.  Tim returns to the Manor, and a grateful Alfred, and once again becomes Robin.

The story continues in Legends of the Dark Knight. 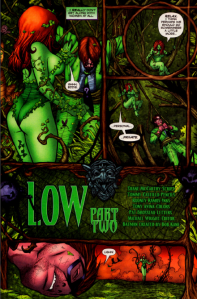 The Riddler is at the mercy of Poison Ivy in the second chapter of his three-part story,by McCarthy, Castillo and Ramos.

Ivy really belittles him.  Not only does he not have any powers, he does not have the stature of the Penguin,or even the Joker.  He whines and pleads and begs.

Marched to the top of a high canopy of trees, and certain that Ivy intends to kill him, the Riddler shows some courage after all.  He tosses Ivy a riddle, and jumps into her jungle.