Detective 864 – Batman returns, and the Question and the Huntress face Vandal Savage

Bruce Wayne is back, and Batman returns as the lead feature in Detective Comics 864 (June 2010), in a story by David Hine, Jeremy Haun and John Lucas.

Jeremiah Arkham is now a resident in his own asylum, after being exposed as the new Black Mask.  Much of his story over the last few years has been very unusual, but also spread around over a number of books and one-shots.  This 2-parter ties up a lot of loose ends.

Although the inmates expect to be able to torment Arkham now, he still knows all there is to know about them, and their families, and now has Black Mask’s ruthlessness.  No one messes with him. 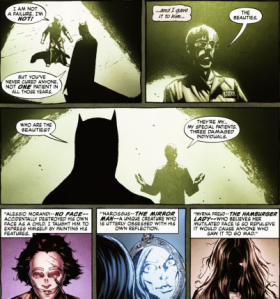 When a man shows up a a police station, with a bomb strapped to him by Black Mask, Batman heads to the asylum to question Jeremiah.  He reveals his three secret cases, seen in an Arkham Asylum special a year or so earlier – No-Face, Mirror Man and Hamburger Mary.  The first two share names with old Batman villains, but are completely different characters. 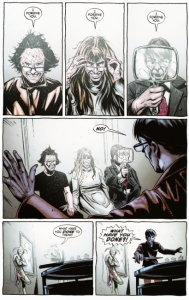 Jeremiah brings Batman to show the three to him, but the entire story suddenly goes completely haywire and surreal.  What is going on with Arkham?  The only hints given are his time spent with Hugo Strange, and the unusual jester wand.

The story concludes next issue. 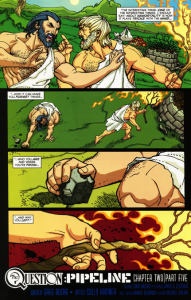 Rucka and Hamner begin this installment of the Question by recapping the Biblical origin of Vandal Savage, who has now been identified with Cain.

He has no problem holding off Huntress and the Question.  And if you can handle having a burning mark on your face, is a crossbow in the eye really likely to slow you down? 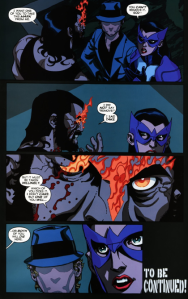 In the end, he forces the women to make a choice.  One of them must accept his burning mark as their own, or he will kill them both.

The story concludes next issue.

Detective 863 – Batwoman ends, and the Question finds the big guy