Action 8 – faster than a speeding bullet, and Scoop Scanlon vs marihuana growers 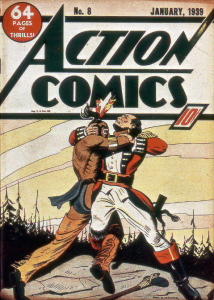 The two men are clearly fighting over which one gets to read Action 8 (Jan. 39) first.  While they’re distracted, grab the comic and read it yourself!

Siegel and Shuster return to social commentary with this issue’s Superman story, which deals with delinquent youth. 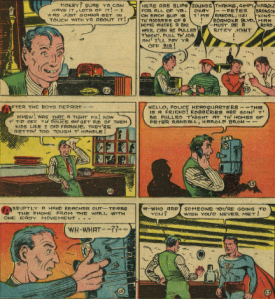 The kids are being used by adult gang members, more than willing to sacrifice them when things get hot.  Superman has no patience for the bad guys, but a lot for the kids.

Protecting the boys from the murderous mobsters, Superman illustrates the saying “faster than a speeding bullet.”

He attempts to scare the kids straight, taking them on one of his dangerous leaping excursions, but the boys enjoy it instead of being frightened.  So he does the reasonable thing, and destroys their homes.

OK, it’s not entirely as insane as it sounds.  He sees news coverage of the government building new housing after a hurricane.  He blames slum life for the problems the kids have, and figures that if he destroys their buildings, the government will build them new ones. 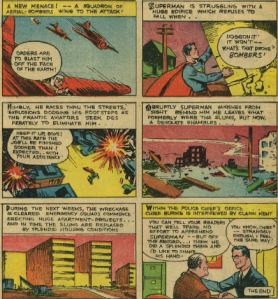 It works, I guess, but only after the army sends out planes to bomb Superman, and destroy even more of the slum.

And while his intention is good, it completely fails to address the poverty the boys live in.  And the fact that Superman would also have destroyed everyone’s furniture, clothing, mementos and such. 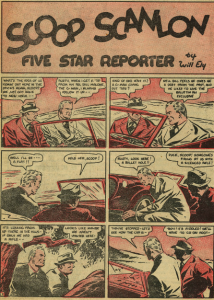 A tip from federal agents sends Scoop, and his photographer Rusty, right into the hands of marihuana growers in this story.

It’s always a bit of a surprise when these old stories mention the drug, which they insist on spelling with an h instead of a j.  But this issue pre-dates the Comics Code, when such things got banned.

Scoop and Rusty have their car shot at, but that doesn’t bother them much.  Scoop is eager to join in the gun play, as usual, and takes down the farmers before writing his story.

Action 9 – Superman hunted, Scoop has a plan, and Zatara and the Tigress in Tibet