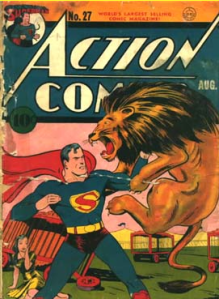 A really good rendering of the 1940s version of the Superman chest emblem on the cover for Action 27 (Aug. 40), but you gotta feel sorry for the lion. 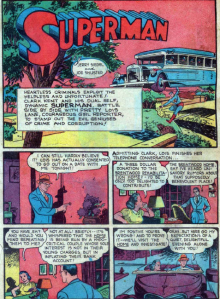 Although this story starts out with Lois accepting a date with Clark Kent, any hint of romance is quickly jettisoned as Siegel, Cassidy and Dennis Neville recount the horrors of an orphanage.  There had already been an orphanage story in the pages of Superman, but this seemed a frequent subject in the era. 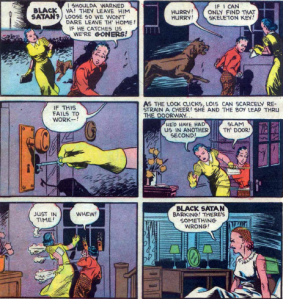 After talking to a boy who escaped, Clark insists they contact the police, and leaves to do so, although of course he really just changes to Superman.  Lois accompanies the boy back into the home, where she runs afoul of the corrupt owners, and their nasty dog Black Satan. 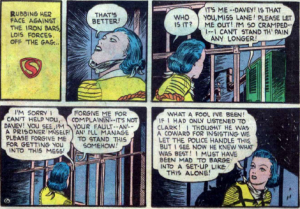 Lois Lane’s soul searching while held captive is a bit difficult to judge. It seems wrong for her to think her “barging into” things is bad, as it is what gets her most of her stories.  On the other hand, contacting the police definitely would have been the wise move. 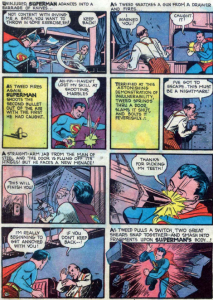 Once the action gets going, the story seems to really want to show off Superman’s invulnerability, as object after object shatters against him. 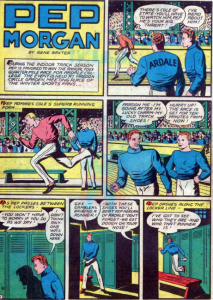 Pep Morgan is back in university in Ardale in this story by Fred Guardineer.  His pro career having gone nowhere, Pep seems to want more out of life than just being a hired goon, and so has returned to complete his education. 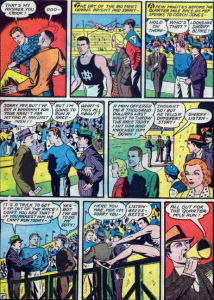 Perhaps he should have left the sports alone, as once again he gets all tangled up with gamblers trying to fix a track meet. 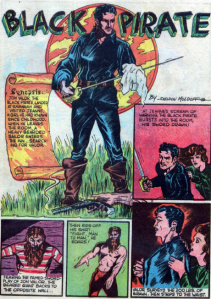 A great pose by the Black Pirate to open this chapter, by Sheldon Moldoff.  Captain Ruff’s brother was the mysterious man who entered the inn at the end of the previous issue, and he and Jon Valor fight.  Valor wins, of course. 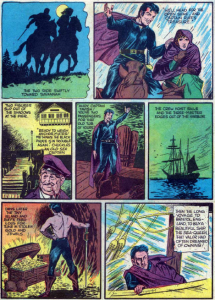 The Black Pirate then sails back to Bristol, where he uses some of the treasure to buy himself a ship.  But the jewels he used for the purchase are recognized as belonging to a collection stolen from a queen.  Oh, oh! 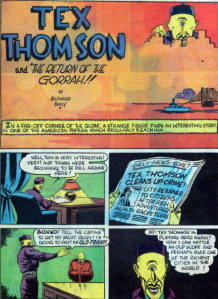 The Gorrah returns, once again seeking vengeance on Tex Thompson in this Baily tale.  Maloney makes a brief appearance, and introduces his daughter, Janice.  This is almost certainly the same woman who returns as his daughter, Peggy. 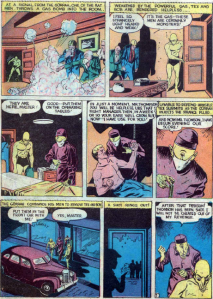 The Gorrah manages to capture Tex, and get him under his spell.  Miss X shoots Tex to prevent him from becoming a murderer, and though it’s just a glancing wound, the shock breaks Tex out of the spell. 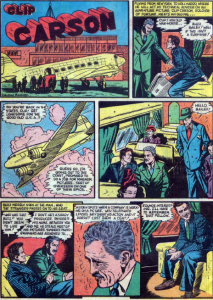 Clip Carson heads to Hollywood for four issues, in this Moldoff story, and begins work as a consultant on a movie called “Adventure Pictures,” which really sounds like a lame title for a movie.  Nonetheless, everyone seems to think it will be a massive success. 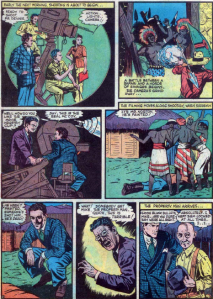 There is a rival film crew that sets up in hidden locales to film the same action, hoping to release their version first, and a foreign film company trying to delay the shooting so they can release theirs first.  Amidst this, actors keep getting murdered on set.

Action 28 – Superman and the strongman, Black Pirate on the run, the Three Aces on Easter Island, and the Gorrah is the Eye