Action 42 – Superman and the city in the sky, the Vigilante debuts, the Black Pirate ends, and Fat Man joins Mr America 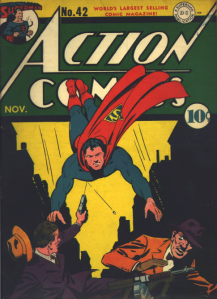 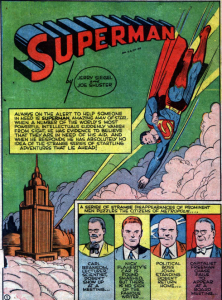 Jerry Siegel and Leo Nowak provide a very non-generic story for Superman on the inside.  A number of prominent men go missing in Metropolis, which Clark covers for the Daily Planet.

Perry White approves of the series, and Jimmy Olsen makes a small cameo.  Superman has some theories as to who is behind the kidnappings, but the trail keeps ending when his suspects keep getting killed by beams coming down from the sky.  Sergeant Casey is also on the case, with no idea what is going on. 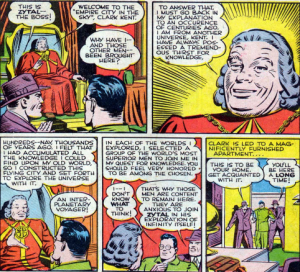 Things only start to move towards an explanation when Clark Kent gets grabbed, and taken up to a city floating high in the stratosphere, ruled by an alien, Zytal.  Clark’s articles made him worthy of being collected. Zytal’s intention of collecting people from different worlds in a search for knowledge vaguely resembles Brainiac’s motivation, many years down the road. 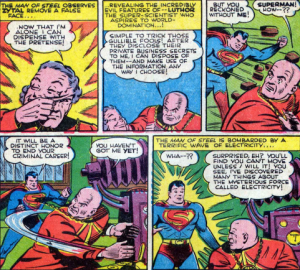 But Zytal is really Luthor in disguise.  He manages to use electricity to not only paralyze Superman, but also put him under Luthor’s mental control for a while.  This is when he puts Lois in danger.  Cause Lois always has to be in danger at some point in the tale.  Superman breaks free, and rescues the people from the city, although Luthor seemingly jumps to his death.

Mort Weisinger and Mort Meskin introduce a really successful blend of the western and superhero genres in this issue, with the Vigilante.  A modern day cowboy who fights crime in the big city, his first case centres on a supposedly executed felon, whose death was faked.

Vigilante’s origin is covered briefly.  Greg Sanders was the soon of a sheriff, who taught him gunslinging and gave him his taste for justice.  After his father was murdered, Greg adopted the guise of the masked Vigilante.  In his everyday life, he is a country music singer.

Meskin’s art is extremely dynamic, and the story is fun to read.

Sheldon Moldoff ends the Black Pirate’s run in Action with a really quick, but mediocre tale.

Jon spots a man adrift, and takes him on board, though Bonnie harbours doubts about him.  Once again, Bonnie is dead on, as the man is working with others to take over Valor’s ship.  The Black Pirate defeats him. From here, the series moves over to join the starting line-up on the new Sensation Comics.

Sidekicks are popular, right?  So the Mr America series could only be improved by introducing a sidekick, right? 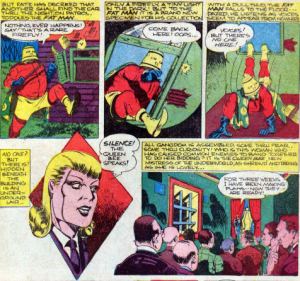 In this story, by Ken Fitch and Bernard Baily,  Bob Daley decides to take on a masked identity of his own.  He puts on long red underwear and a lampshade on his head, and armed with a broom and a squirt gun of ink, takes to the streets as Fat Man. 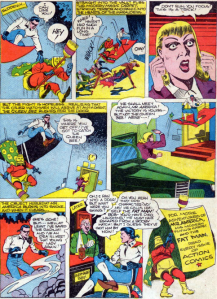 Tex has no idea of Fat Man’s identity at first, he has been busy in his secret cabin/laboratory in the woods making his cape function as a flying carpet.  Together they face the Queen Bee, the first of many DC villainesses to use that name.  The Queen Bee returns later in the run.  So does Fat Man.  Sadly.

Action 41 – Superman and the saboteur, Pep Morgan ends, the Black Pirate chooses to forget, and Congo Bill battles for loyalty