Ira Yarborough is the artist on the Superman story in Action 115 (Dec. 47).

The story opens with a rich but lonely boy who writes a letter to Superman.  The letter is grabbed by a crow, which promptly get shot by a farmer, who intercepts the letter.

The farmer then does a really lame job impersonating Superman, but it’s good enough for the boy, who lets himinto the house.  The phony Superman steals diamonds from the safe, and takes off, leaving the boy devastated at his hero’s betrayal. 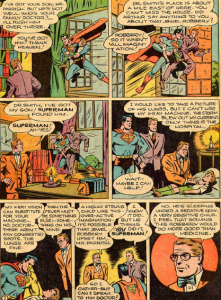 The news of Superman’s apparent theft reaches the Daily Planet, which gets the real Superman on the case.  The boy has fallen ill, and is being treated by a doctor who seems to have little faith in his own profession, insisting that the best cure is solving the crime.

And it turns out the doctor was right.  Superman finds the farmer, retrieves the diamonds, and gets the man to confess to his impersonation.  The boy is cured, as his faith in Superman is restored.

George Roussos really goes to town on the Vigilante story in this issue, which clips along at a rapid pace, with excellent visuals.

It’s more crimes by the Rainbow Man, using his colour wheel.  Unlike the last story that featured that wheel, which seemed to imply that the crimes were only conceived after the colour was chosen, this one makes it clear that the Rainbow Man has a number of plans ready to go, and just uses the wheel to pick the next one.

He pulls off quite a few robberies during the course of the story, with Vigilante and Stuff constantly on his trail.  They succeed at capturing him at the end, spray painting him and his men green to aid in their identification.