Action 149 – Jor-El and Lara’s courtship, Tommy Tomorrow in the movies, and the debut of the Vigilante-cycle 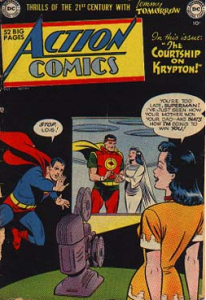 Action 149 (Oct. 50) has the earliest version of the romance between Jor-El and Lara.  A version that has been entirely dropped from continuity, for very good reasons. 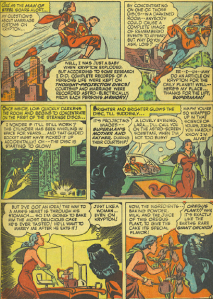 Al Plastino handles the art as a rocket lands on Earth, apparently just outside Metropolis. Lois Lane is covering the story, and finds three Kryptonian discs in the wreckage, which just happen to record how Jor-El and Lara came to be married.  Figuring that this will give her insights into winning Superman, she plays the discs.

The whole story is just shameful, so sexist.  Lara is portrayed as a dim-witted, love-sick woman, and Jor-El her brilliant and patient beau.  The first disc has Lara trying to win Jor-El through cooking, which Lois emulates, although it turns out disastrously. 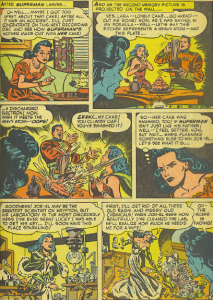 Lara failed in her culinary attempts as well, and then set out to clean Jor-El’s lab, while wearing what appears to be an evening gown. 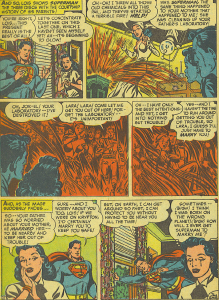 Lara’s cleaning winds up causing a fire, and Jor-El decides to marry her, because she is so incompetent and needy.  Wow.  That’s just.  I’m so glad this story fell out of canon. 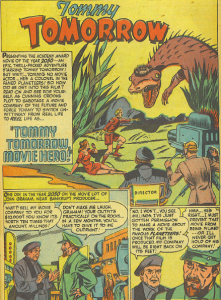 The Tommy Tomorrow series jumps ahead to being set in 2050, a round hundred years from the present day, and a much more comfortable amount of time in the future than forty years.  Swan and Fischetti do the art on this story, which is really much the same as almost every Hollywood based story, despite it’s science fiction locales. 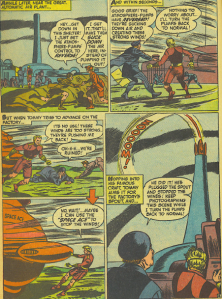 Some one is sabotaging the production of a movie, and Tommy is assigned to find the culprit.  Along the way,he acts to prevent acts of sabotage, all of which gets caught on film. 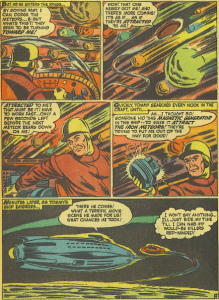 In the end, Tommy stops the one trying to halt the production, and winds up starring in a hit film. 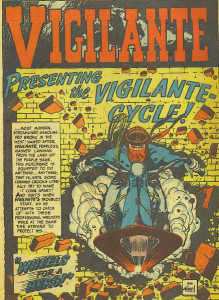 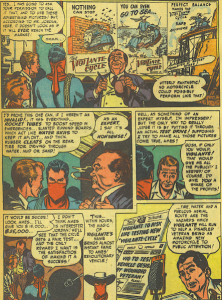 An inventor presents Vigilante with a new, upgraded version of his bike.  He is hoping to make money selling copies, with the Vigilante’s endorsement.  There is a rival businessman, trying to buy the rights to the bike for less than they are worth.  He insists the cycle is unsafe, so Vigilante runs a series of highly publicized tests.  The rival tries to sabotage these. 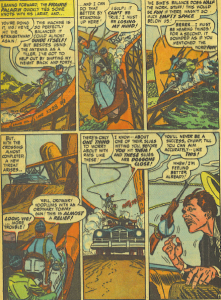 That’s the plot in a nutshell.  The rest of the story demonstrates the impressive array of abilities this cycle has – everything but flight, though it can do rocket-powered leaps.  A successful “upgrade” of the series, in an increasingly technophiliac age.

Action 146 – Superman vs the Statue of Liberty, Tommy Tomorrow creates rotation, and the Vigilante finds the ship in a desert