Action 218 – the Super-Ape from Krypton, and Tommy Tomorrow returns to the Interplanetary Aquarium

The first of a number of Kryptonian apes to come to Earth, the Super-Ape from Krypton debuted in a story by Boring and Kaye, in Action 218 (July 1956). 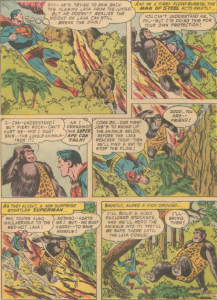 Reports come in to the Planet about a flying ape.  Superman heads out to investigate, and finds the rumours true.  The ape can not only fly, but also talk. 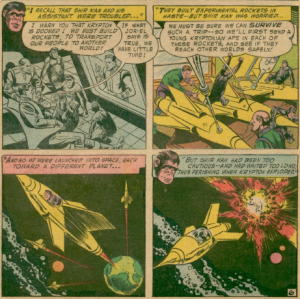 The ape is from Krypton as well, sent, along with his family, in a series of test rockets by others planning to flee the exploding planet. 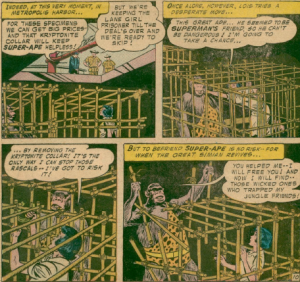 People are out to capture and exploit the ape.  Lois Lane gets involved, if only to get captured.  But in a change of pace she winds up freeing Super-Ape, who frees her in turn, with Superman not needed for his usual rescue. 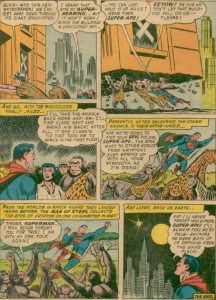 At the end of the story, Superman flies the ape to the planet where the rest of his family is, and we never see this character again.  But not too far down the road would come King Krypton, and later Beppo, the Super-Monkey, both of whom have their antecedents in this character. 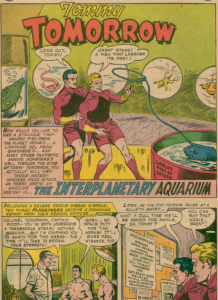 Tommy Tomorrow and Brent Wood go to check out the Interplanetary Aquarium, in this story by Otto Binder and Jim Mooney, which happens to share the name of the first Tommy Tomorrow story, also written by Binder.  Considering that he wrote both stories, it really would have been nice to have Tommy acknowledge that his career in the Planeteers began with his assignment at the Aquarium, or that he was going to go see how it had done in the intervening years. 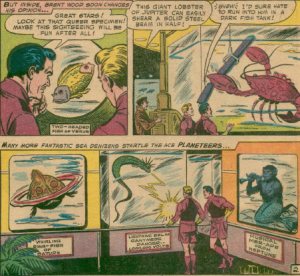 And actually, with Mooney on the art, this really doesn’t even look like the same place.  Not nearly as cool as Swan’s conception. 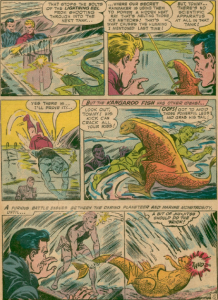 The story has one of the fish turn out to be an intelligent alien scout, operating to pave the way for an invasion, but Tommy figures out the scheme.

Action 215 – the Superman of 2056, and Congo Bill and the butterfly collector