Action 472 – Faora escapes from the Phantom Zone, and Steve Lombard meets his double

Bates, Swan and Blaisdel continue with the introduction of Faora in Action 472 (June 1977). 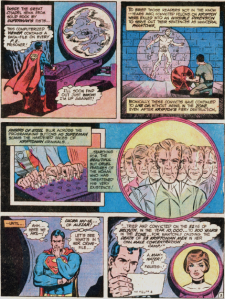 Heading to his Fortress of Solitude, Superman scans the records of Phantom Zone prisoners until he finds the file on Faora Hu-Ul.  She has a fanatical hatred of men, and killed hundreds in a personal concentration camp, for which she was sentenced to the Zone.

And though it is not clear exactly how this works, she gets the old man to focus on her, while holding an alien artifact stolen from Clark Kent’s apartment.  This allows her to burst free from the Zone, and attack Superman.  Even being able to see her in the flesh, the old man still thinks this is his dead wife, Katie.  Faora is a master of a form of Kryptonian martial arts, dealing with reflex points, and manages to best Superman in battle. 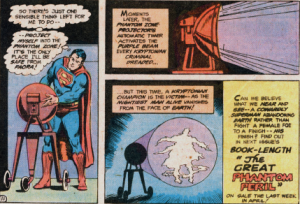 The ending of this chapter is a bit of a shock, as Superman flees form Faora, and heads into the Phantom Zone to hide. 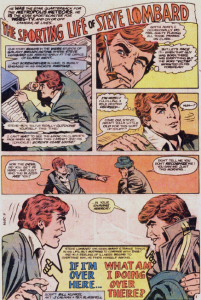 Bill Kunkle, John Calnan and Tex Blaisdel provide another chapter of the Sporting Life of Steve Lombard, as he comes face to face with an identical double.  To Steve’s consternation, no one else seems to be able to see the guy.

Steve is driven to distraction by the man’s appearances, and everyone claiming he is not there.  The hoax is ruined when Steve catches the man’s voice on a tape recorder, and he realizes he is the butt of an April Fool’s gag, which Clark, Lois and Jimmy were all in on. The final panel reveals that Steve’s mysterious double was actually Batman.