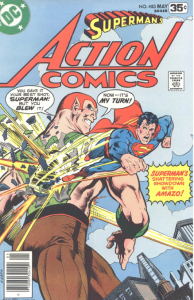 Bates, Swan and Chiaramonte conclude the Amazo saga in Action 483 (May 1978). 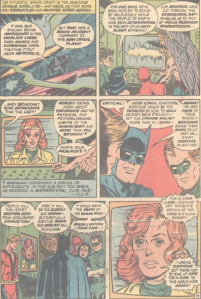 Both the Leaguers trapped on the satellite, and an exhausted Lana Lang broadcasting, are used to get the audience up to speed.  Superman has regained his powers and returned to Earth, so has Amazo, determined to kill his creator, Professor Ivo.  Amazo has made it so that no one can fall asleep, leaving everyone burned out and draggy. 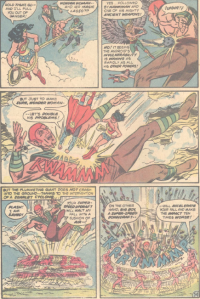 Sadly, I find this the weakest of the four issues.  Superman frees the rest of the Justice League, and there is a massive battle with Amazo, in which everyone gets to take part.  They do manage to defeat him, but frankly, the Justice League usually has more difficulty with the android, and teaming up rarely works against him. 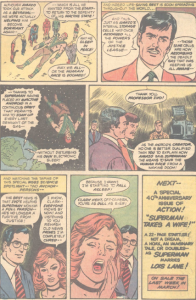 It’s also kind of odd that Ivo is consistently treated as a hapless victim throughout the story, and the ending really plays him this way, instead of as the dangerous mad scientist that he is.

All in all, this really could have, and should have, ended with the previous issue.

Action 482 – Amazo vs the Supermobile