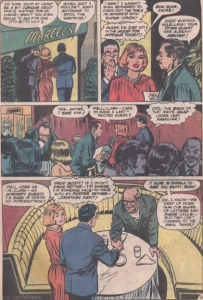 Following their broadcast one night, Lana Lang informs Clark that she has as surprise for him, and takes him out to dinner.  At the table is Jonathan Kent, his long-dead adopted father.  Both Kent and Lana act as if nothing unusual is happening, but Clark is very suspicious.

As the dinner goes on he uses x-ray vision on the man’s body, and fingerprints, but sees nothing to indicate that this is not his father.

The story cuts away to a street kid, Starshine, whose success at begging has just improved, as he gains the power to make his wishes come true. 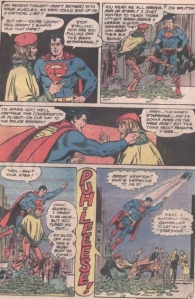 Pa Kent makes an excuse, needing a refill of his pills, to allow Clark to get away.  The exact empty pill bottle that his father would use for that purpose.  Superman confronts Starshine, who sends him off on a slow boat to China, literally.  Superman is helpless to return until the boat reaches the coast. 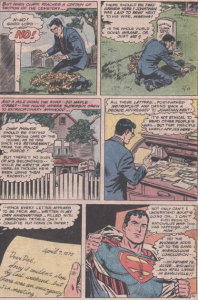 Clark heads to Smallville, and finds no trace of his father’s grave, and even finds letters in his own handwriting, as if he had been writing to him for years.

Action 502 – Superman, Supergirl and the Star-Child