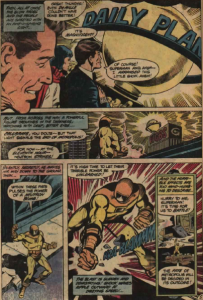 Morgan Ledge gathers the Daily Planet/WGBS staff on the roof for the celebration of the return of the globe.  Lis Lane, Lana Lang, Jimmy Olsen, and of course Perry White are there. Meanwhile, Clark is frantically searching the city as Superman.  Neutron has told him that he has placed bombs throughout the city.  The art alone makes it fairly obvious that one of them is in the big glowing globe, surrounded by all his friends.  But it takes Superman until close to the end of the story to figure that out. 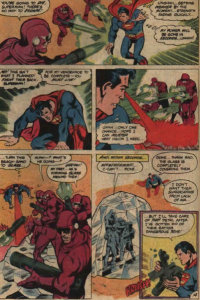 Along the way, Superman runs into the H.I.V.E.  They want to get rid of the bombs as well, and could work with Superman on this goal, but prefer to try to kill him. 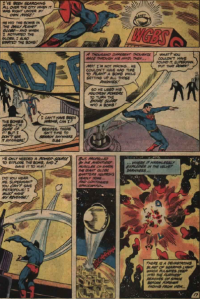 Superman gets rid of the explosive globe, but replaces it with a safe one.  He captures Neutron far more easily than one might expect, encasing him while he is in his energy form.

Air Wave gets a more series adventure in this issue, by Rozakis, Saviuk and Colletta. 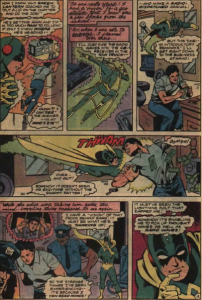 After being struck by lightning, Hal discovers that he has the ability to pick up on people’s thoughts, justas if they were broadcasts.  This comes in useful at school, when quizzed on work he hadn’t read.  But even more useful when his uncle Jack gets kidnapped.

Jack Jordan is a District Attorney, and he has been grabbed by mob goons who want vengeance.  Air Wave’s telepathy vanishes before the end of the story, but helps him find, and save, his uncle.