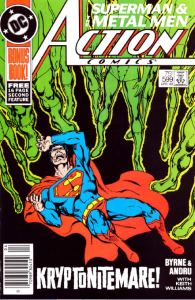 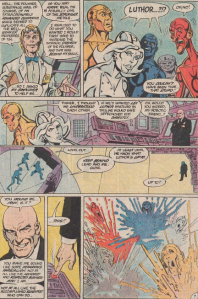 Doc Magnus continued to refuse to rebuild Tin after their previous outing, so the Metal Men went to another prominent scientist for help.  He was working for Lex Luthor. Bad person to go to.  Lex extracts the responsometers from the robots – Magnus’ crowning achievement, which gives them their personalities.

With Tin rebuilt, the team’s sentience in a box, and their bodies down the drain, Luthor feels he has succeeded.

Tin has been rebuilt into the Kryptonoid Man, with which Lex intends to kill Superman. But this artificial kryptonite proves to be nowhere near as good as the real thing, and though it hurts Superman, it does not kill, or even weaken him.

Superman retrieves the responsometers, and throws them into the Kryptonoid Man.  The creature splits apart as the Metal Men reform themselves.

Doc Magnus is still angry, but remakes them the way they originally were.

The Metal Men take a few years to return, and do so in the pages of Justice League Europe.