Action 602 – the funeral of Katma Tui, Deadman sees a ghost, Wild Dog and the crusader, the Secret Six get murdered, and Blackhawk checks for tags

Excellent Green Lantern cover on Action 602, though not really related to his story.

Owsley and Kane deal with the consequences of Katma Tui’s murder, which John Stewart blames Hal for, indirectly.

Arisia and Kilowog join the two men at Katma’s funeral, which gets crashed by a gloating Star Sapphire.  She and Hal fight it out. 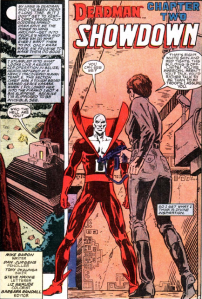 Baron, Jurgens and DeZuniga continue the Deadman story.  The CIA chief is surprised to be able to see Deadman, as surprised as he is to be seen.  But she is the one who goes on the attack, with an odd weapon that is able to hurt him.

Hiding inside another person does not help, she can see that as well – perhaps even the way the reader can, with a glowing outline.  But the CIA chief also has a spirit inside of her. 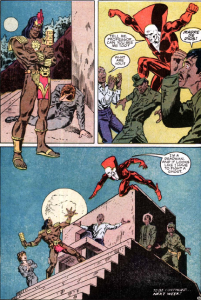 And this spirit looks far more suited to the ancient pyramid than anyone else.

Collins, Beatty and Nyberg introduce the villain for this first Wild Dog storyline. 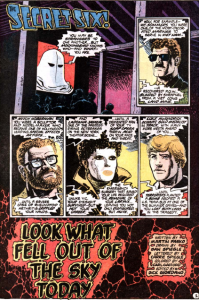 Pasko and Spiegle introduce us further to the new Secret Six.  Each one has suffered some debilitating ailment or injury, which prevents them from continuing with their careers.  Mockingbird offers them all high tech gear that will overcome these problems.

At the same time, the original group gather for drinks as they await word from Mockingbird, who has a plane trip lined up for them.

The new team head home with their devices, which abruptly stop working.  But they are still better off than the original team, who discover their plane has been rigged to crash.

Grell, Burchett and Marcos show almost all there is to Blackhawk as he fights off four men. 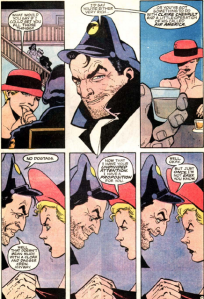 After defeating them, he gets down to business with the woman who came to hire him, Cynthia Hastings.