A sombre Blackhawk cover on Action 603. 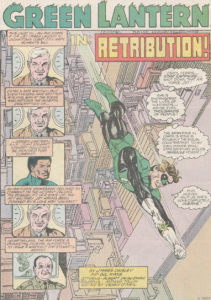 It’s pretty much non-stop action as Owsley and Kane have Hal Jordan catch up to his former lover, and murderer of Katma Tui, Star Sapphire. 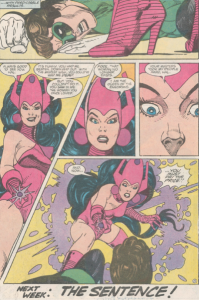 When it looks like Hal might win, Carol acts scared and possessed by the evil queen of the Zamarons, but that is just an act, and the story ends with Star Sapphire triumphant.

As the old Secret Six burn in the wreckage of their plane, the new ones gather to find out what happened to their high tech gear, in this Pasko and Spiegle tale. 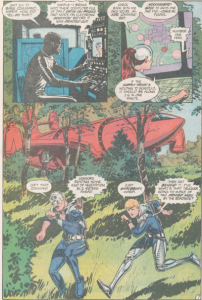 The deal is that they will perform missions for Mockingbird, and not try to find out who he (or she) is.  As long as they do this, their devices will continue to function.  They begin their first mission.

Baron, Jurgens and DeZuniga have a bit of a time out in this chapter.  Deadman and Talaoc start fighting, with Talaoc claiming to be a god (the god Talaoc, I betcha). 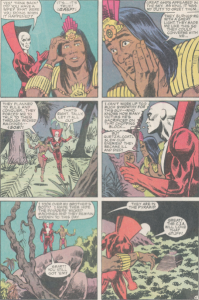 Deadman insists that Talaoc is a ghost, and with some prompting, he recalls a life before the arrival of, what is clearer to us than to him, an alien spaceship. 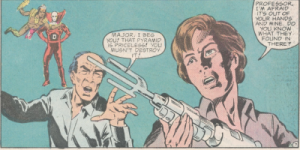 Which explains where the weapons come from, and that unusual sound emanating from under the pyramid.

Collins and Beatty continue with Wild Dog, as he learns of the bombed bookstore.

Though he talks about morals and purity, Lyle Layman has no problem cozying up to a widow, one of his followers.

Wild Dog is not sure if the bomber is Layman, or just one of his devotees, so he joins the group as himself, Jack Wheeler. 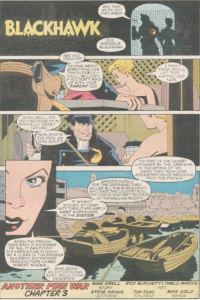 Grell, Burchett and Marcos lay out the plot in this chapter of the Blackhawk story. There is a stolen cache of gold, lost during the last days of World War II in the far east, and now most likely in the possession of a notorious smuggler and thief, the Red Dragon.

Blackhawk and Cynthia head to the hangar to get his ship. They will pose as rumrunners, aiming to get captured by the Red Dragon, and go from there.

Action 602 – the funeral of Katma Tui, Deadman sees a ghost, Wild Dog and the crusader, the Secret Six get murdered, and Blackhawk checks for tags

Action 604 – the murder of Carol Ferris, comic books are evil, becoming a movie monster, getting in the bottle and Andre’s busy