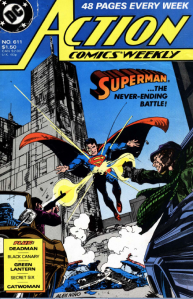 Superman gets the cover of Action 611, which means his series gets an update in this entry. 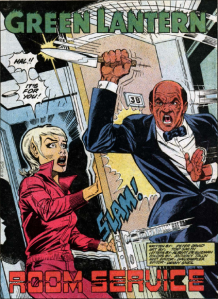 David and Smith give Arisia a chance to show what she can do without a ring in this story. 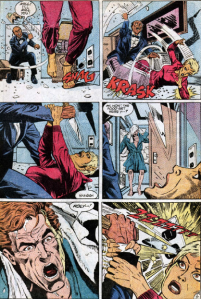 As the room service waiter tries to kill her, Arisia fights him off, and shoves his knife into a socket. Hal was in the shower.

And the day is not over for Arisia.  Waiting to file a report at the police station, she meets woman who wants to sign her as a model.

Green Lantern talks with the police, and creates a hundred monkeys to search the trash, looking for any note possibly sent by the one causing the outbursts of violence.  The note gets found, but Hal falls victim to the villain, Mind Games.

Baron, Jurgens and DeZuniga continue with the Deadman story.  the DB Cooper devil finds himself not being believed by the head of the CIA. 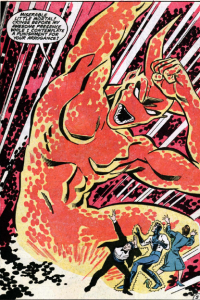 So he shows what he can do.  The devil goes back (to the jar?), taking Yakim with him.

But the story is not yet over!  Talaoc returns, with the space ship. 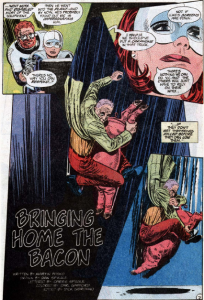 The Secret Six find themselves in danger of being exposed in this Pasko/Spiegle story. 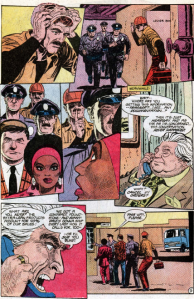 Some quick changes of costume, and a bit of luck, get them out of the meat processing plant.  The contaminated meat is part of a special “extra-lean”pork creation.

Stern, Swan and Beatty continue with the Superman strip.  The man who Superman rescued is part of a cult of Superman worshippers.  They have a degree of super-powers, which they believe come from Superman himself.  Clark has no idea why they think this, but the man uses his abilities to show Clark and Perry his cult, under attack by some scary high tech people.

Catwoman begins a four-part story, of one of a couple to run under the Showcase label in Action Comics Weekly.  By Mindy Newell, Barry Kitson and Bruce Patterson, this story is set a while after Batman: Year One, and brings back Holly Robinson, Selina’s best friend from that storyline. 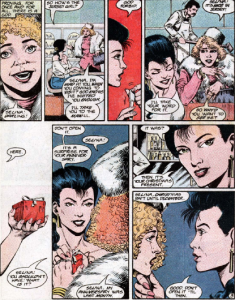 Selina is running a small club now, while also operating as Catwoman.  She steals a jewelled cat, and gives it to Holly as a present.  A wedding present, once she finds out Holly is settling down in New Jersey.

But everyone from the police to organized crime knows that she must have been the thief, and they all come for her. 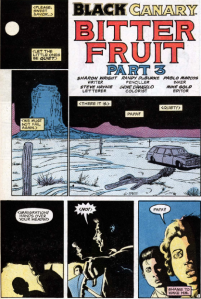 Wright, DuBurke and Marcos continue the Black Canary story, which now also involves smuggling Mexicans across the border.  Because it hadn’t been complicated enough in it’s first two chapters.

Canary hits the bars to extract information.  But while she is terrorizing men who likely deserve it, Rita’s father gets murdered in the hospital.

Action 612 – Green Lantern vs Mind Games, the Secret Six and Deadman end, Catwoman on the run, and Black Canary takes a shower