Action 625 – Hal unites enemies, Billy gets caught twice, the Secret Six tie it together, Deadman pulls her out, and who spikes the drink?

While I like this image of Deadman, none of the supporting characters shown are in this story, or anywhere in his run in Action Comics Weekly.  And despite saying that he “wraps it all up,” issue 625 is not the resolution to his storyline. 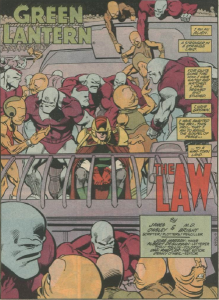 Owsley, Bright and Marzan have Hal end the war in outer space, as his Green Lantern ring is a far more powerful weapon than either side has.

Of course, the result is that the two sides ally together against him.  This subplot is not resolved in these pages, but does get a follow-up in a Green Lantern Special in 1989. 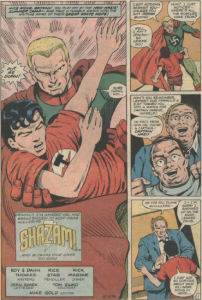 Billy Batson falls right into Captain Nazi’s arms at the opening of this story, by the Thomases, Stasi and Magyar.  Billy is presumed to just be a rambunctious boy, but otherwise good little white racist.

But later, as they all go on an outing, Billy gets recognized by one of the other campers, and instead of taking part in arson, he becomes the kindling.

Some degree of explanation is given in this Secret Six chapter, by Pasko, Springer and McLaughlin.  August Durant had all the background and motivation to form the original Secret Six, as he worked to stop the people who had created the virus he was infected with.  Technodyne had been working with it, as well as the meat processing – it was what contaminated the pork.

The Six have pretty much put this together, as has Washington.  But why did Durant kill the rest of the team? 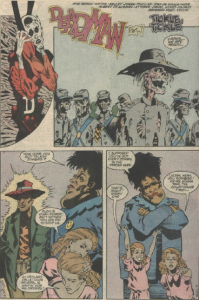 Baron, Jones and DeZuniga’s zombie-laden voodoo queen story is an awful lot of fun, and probably deserves better coverage than I am giving it.

Deadman manages to scare of the twins out of the girl she is inhabiting, and can hold onto her, preventing her from entering anyone else.  He uses this to get the other sister to leave the other sister.  But the ghostly girls then enter the bodies of Madame Waxahachie and her handyman.

Wright, DuBurke and Marcos give Dinah some workout time as Black Canary, because the bulk of this chapter follows the killer and her victim.

The hooker accompanies a man, Sarno, up to his room, then leaves shortly after.  We see that he is dead.  But was it really the hooker, or the actress dressed up as her?

Action 626 – the dangers of duplication, Captain Marvel ends, Rafael gets free, Deadman ends, and Black Canary on the hunt