Blackhawk has the cheap seat on the cover of Action 628.

Green Lantern and Captain Atom continue their team-up in this story, by Owsley, Bright and Tanghal.

Captain Atom has already referred the alien problem to the military, and Green Lantern is not pleased about that.  He has a better understanding of the creature, who had no malevolent intent. 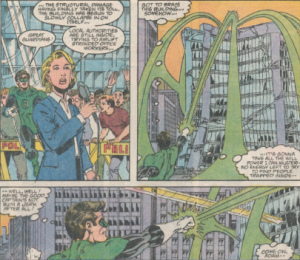 They both rush off to deal with the damage he is causing.  Hal is using his ring to stabilize a collapsing apartment, holding it until it can be evacuated. 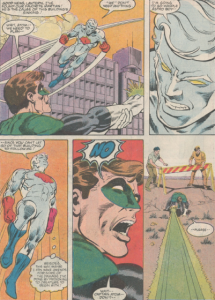 Captain Atom takes advantage of this, and flies off to confront and kill the alien himself. 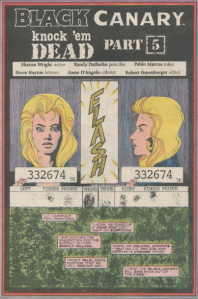 Wright, DuBurke and Marcos ended the last chapter with Black Canary getting arrested.  She fares better at the station, where she is recognized, and her work appreciated.  She is not only released, but her pictures and prints are destroyed.

For the rest of this chapter we follow the second murder, of a drug dealer.  The actress comes to see him first, as a new customer, and poisons his drink.  The Deb is right behind, so once again she is believed to be the killer.

Wolfman, Wilkerson and Mandrake continue to label this as Nightwing and Speedy, even though the story now follows Roy and Lian, on the train, with Nightwing nowhere in sight.  Issue after issue I became less interested in the story, and increasingly annoyed at this situation.

There is a shady guy who runs into Roy on the train, and follows him through many chapters.

Pasko, Springer and McLaughlin continue to wind up the Secret Six saga, as they find the bodies of five of the six people from the plane crash.  But then, we sort of already knew that was the case.

More puzzling, after all the evidence that Durant created the group, is the revelation that Mockingbird is the magician, Carlo di Renzi. 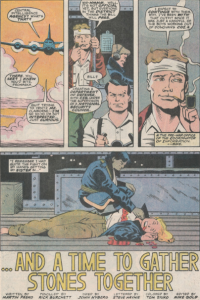 Pasko, Burchett and Nyberg begin the third Blackhawk tale seconds after the first, with Janos still mooning over the corpse of the aviatrix from the previous story, as the team form their links with the fledgling CIA. 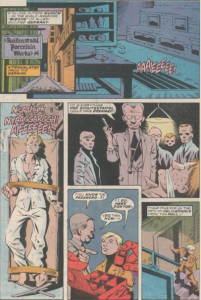 And we get a glimpse of the bad guys, German scientists doing what appear to be nasty experiments on humans.