Action 639 – Speedy at the hospice, Glenda and Randu at Wookey Hole, Hero Hotline helps out, Superman starts a new story, Phantom Lady blends in, and Wild Dog gets mad 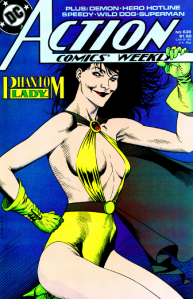 Phantom Lady looks pretty proud of herself on the cover of Action 639. 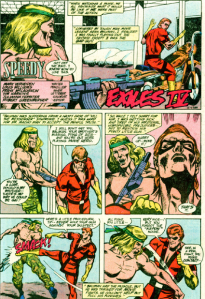 Speedy shows that actors are not as impressive fighters in person in this chapter by Verheiden, Williams and McLaughlin.

Speedy tracks the actors brother to an AIDS hospice, which is being picketed by right-wingers. 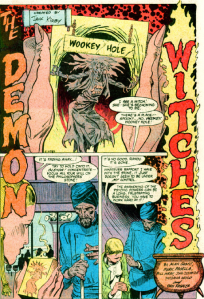 The Demon is not the main character in this installment of Grant, Pacella and Wray’s story.  Glenda and Randu are in focus, as they follow the Philosopher’s Stone to Wookey Hole.

There, as Merlin suffers, Morgan le Fay is restored to life, without her hand. But Etrigan is not completely absent, watching over her return. 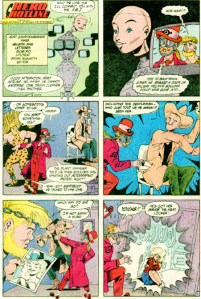 A few different storylines are being followed through the Hero Hotline series, by Rozakis, DeStefano and Wray.  A country music star has been kidnapped, and there is still that cat plotline. 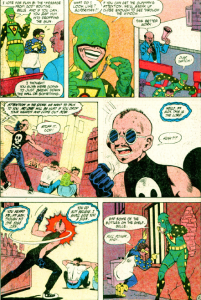 But the story in focus this issue is a hostage taking at a liquor store.

Superman begins another, very brief, storyline before Action Comics Weekly ends.  As before, Stern, Swan and Anderson are the creative team.  The hero deals with racism against Quraci immigrants in the US.

Dee Tyler gets a good idea of what is bothering her father, the Attorney General, in this Phantom Lady installment, by Strazewski, Austen and Martin. 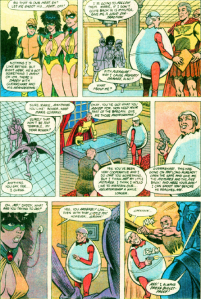 Her father is hosting a costume ball that night, and Phantom Lady proves to be a popular choice, making things easy for Dee, who follows some men to her father’s office, and learns that he is bring blackmailed.

Collins, Beatty and Nyberg continue with Wild Dog’s anti-crack campaign, hunting down the gangster boy who enticed the young kid into delivering drugs.

Wild Dog catches up to him right after the guy has had sex, which leaves him in a very vulnerable position.  A few shots to the crotch is all it takes for him to give up the name of the man above him.

Action 638 – Speedy confronts intolerance, the Demon takes the bait, a new hero gets a name, Superman addresses his flock, Phantom Lady in combat, and Wild Dog loses his cool