Detective 853 – the concluding half of “Whatever Happened to the Caped Crusader?”

Detective 853 (April 2009) has the second half of Neil Gaiman’s “Whatever Happened to the Caped Crusader?”, with art by Andy Kubert.  The story is a thematic sister to Alan Moore’s “Whatever Happened to the Man of Tomorrow?”, and exists sort of on its own, as a two-part story outside normal continuity, but also fits neatly into what is currently occurring with Batman.  The first half was published in the previous issue of Batman.

As with the first half, the story is set at Batman’s funeral, with friends and enemies in attendance.  While the first issue gave a lot of time to a couple of stories, this issue give a number of characters a brief opportunity to tell their versions of how Batman died. 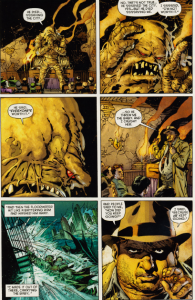 As well as Betty Kane, shown in the original Bat-Girl outfit for the first time since 1978, eulogies are given by the Mad Hatter, the Joker, Dick Grayson, when he was still Robin, Clayface, Harvey Bullock and Ra’s Al Ghul. 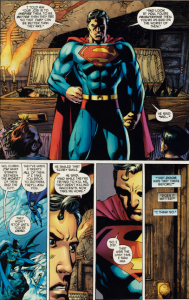 Superman’s speech ends this section, as Batman starts to become aware of what is happening.

He suspects that he is having a near-death experience, and the voice that has been with him throughout this,now identified as his mother, tells him that this is true. 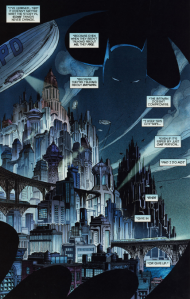 The story becomes a meditation on what Batman is, what he stands for.  Batman cannot ever simply retire and live happily ever after.  He is about never giving up, so Batman can only die in action. 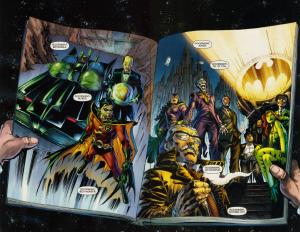 He asks if he is going to heaven or hell, but the woman replies neither. He does not get those options.  He gets to be Batman, that’s enough.  As the story reaches it end, it takes on the Goodnight Moon narrative, as batman bids good-bye to the cave and the car.  Robin, Alfred, Commissioner Gordon and his villains – Joker, Catwoman, Riddler, Two-Face, Penguin, Ra’s Al Ghul and Poison Ivy shown.  The art mixes past and present versions, creating an eternal Batman. 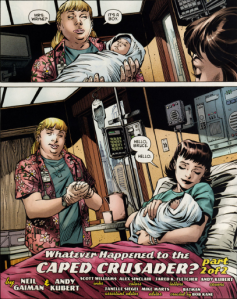 And it ends as Martha Wayne gives birth to Bruce.  His death takes him back to his birth, and the cycle begins again.

It serves as a reflection on a character that can never be killed off, in a medium that is so easy to re-read.  Endings launch beginnings, and everything comes around eventually.