Action 45 – Superman builds an ark, the Vigilante meets Stuff, the Chinatown Kid, and the Three Aces find survivors of Lemuria 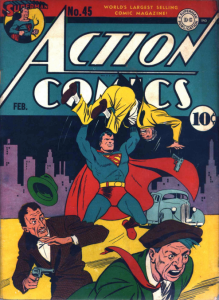 Another generic Superman image on the cover of Action 45 (Feb. 42). 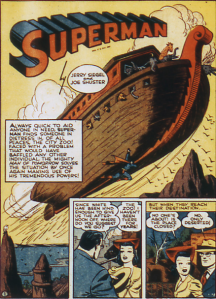 The Superman story, by Siegel, Nowak and Dobrotka, begins with Lois and Clark taking a trip to the zoo, only to discover that there are very few animals there.  The zoo has not been able to afford to buy any.  And apparently is not very good at keeping the ones they have alive and reproducing.  Superman builds a giant ark and flies to Africa to restock the zoo.

Once there, he runs into Count Von Henzel, and the story suddenly weaves into the Most Dangerous Game.  Despite the fact that they make the count German, the story avoids anything about the war.  And it still winds up showing Superman beating up animals and carting them back to the zoo.  You’d think they might have been aware of the parallel between the count imprisoning and hunting people, and the zoo imprisoning, if not hunting, the animals, but they weren’t. 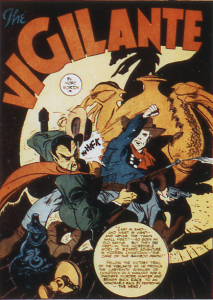 More amazing art on the Vigilante story, as George Roussos takes the inks on Meskin’s pencils for Weisinger’s story. 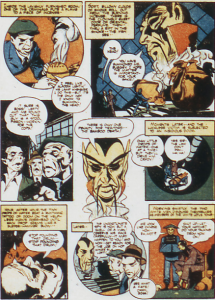 The villain of the story is the Head, who sometimes appears as a giant head.  The story seems  be a “yellow peril” one, set in Chinatown, although it deals with silk thefts rather than opium or white slavery. 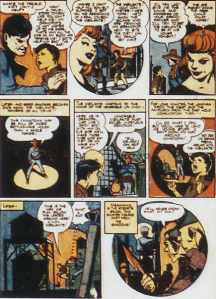 Betty Stuart makes her final appearance. Can’t blame her, she has been sidelined in every story so far.  Stuff, later to gain the nickname the Chinatown Kid, enlists the aid of the Vigilante when his grandfather is framed for the thefts.  He also rescues the Vigilante after he is captured by the Head and subjected to Chinese water torture. 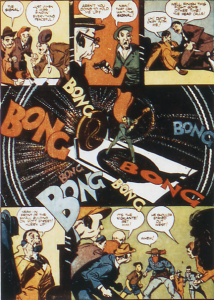 Ironically, despite the water torture and the Chinatown location, the Head is actually Japanese.  He is a foreign agent, sent to try to stir up a gang war. 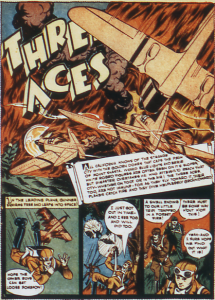 The Three Aces find a golden city high in the California mountains, and discover it populated by survivors of Lemuria, an Atlantis-like sunken ancient city. 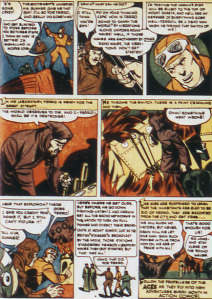 With humans continuing to encroach upon them, the Lemurians have decided to use their advanced weaponry to destroy mankind.  The Three Aces win by blasting everything to bits.  Many of their stories see them triumph by destruction.

Action 44 – Superman vs a caveman, the Vigilante vs the Shade, and Congo Bill stays behind 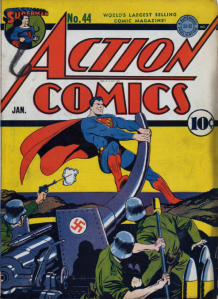 The US was not yet part of World War 2, but Superman seems to have chosen a side on the cover of Action 44 (Jan. 42). 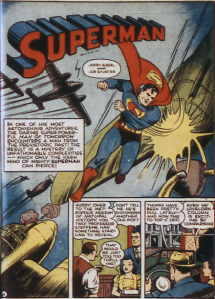 Siegel, Nowak and Dobrotka helm this story, in which a caveman is discovered in the ice, and thawed out and revived. 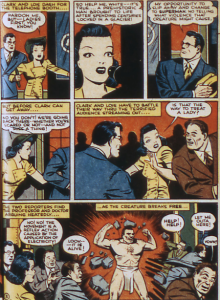 Lois Lane and Clark Kent are there covering the story when the “dawn man” breaks free.  Lois, trying so hard to succeed in a “man’s” profession, has no trouble playing on her gender when it gets her what she wants .  “Ladies first!” 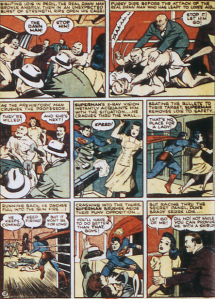 The caveman goes on a murderous rampage, but it turns out there are really two of them.  A real caveman, but also a fake one, committing intentional murders that are blamed on the neanderthal.  Superman figures it all out. 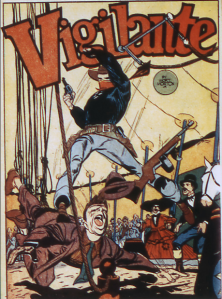 The two Morts pull off another great Vigilante story in this issue, bringing back the Shade. 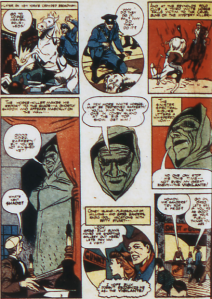 The Shade is having his men kill horses, for unknown reasons.  Vigilante tries to protect the animals,but winds up accused of killing them himself. 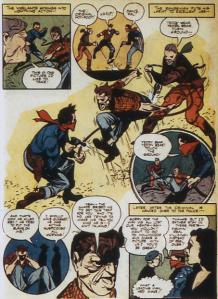 Billy Gunn comes to Vigilante’s help when he’s being accused of being the horse killer, and Betty Stuart is also around, but does little.

The Shade gets captured, and is revealed to be a radio announcer, who had been around throughout the last couple of stories.  The horses had been used to smuggle in maps of stolen bonds.  This Shade never appears again. 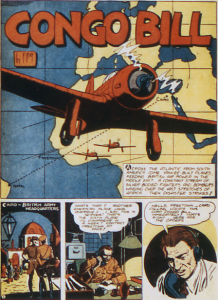 Fred Ray brings about some changes in the Congo Bill strip this issue. 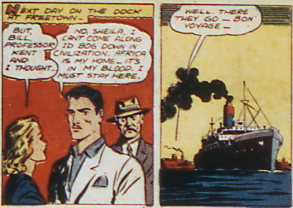 Bill continues to work with the British against the Germans in Africa.  Professor Kent winds up his research, and heads back to the US, and Sheila Hanlen goes with him.  I guess they hit it off between panels. Neither character will appear again, but it’s nice that they were formally written out. 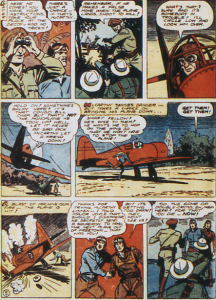 As for Congo Bill, his series shifts from adventure stories to war stories. 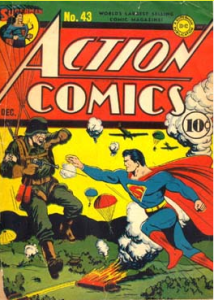 Superman fights the Nazis on the cover of Action 43 (Dec. 41).  And though one might associate the cover date with the US entry into the war,in fact this book was printed and on sale in mid-October of the year. 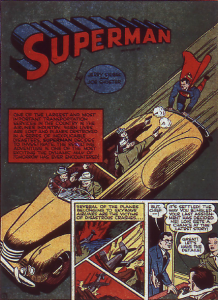 The Superman story in this issue, by Jerry Siegel, Leo Nowak and Ed Dobrotka, is average.  Lois Lane is sent out to write a story about an airline whose planes keep crashing.  Superman follows, to rescue her periodically. 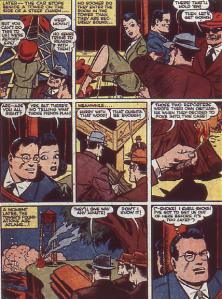 He gets into his Clark Kent clothes, claiming to have followed her.  This happens largely so that they can be captured and bound together, to make it difficult for Superman to get away.  But the scene ends in a lame cop-out, as Lois knocks herself out, banging her head while trying to escape. 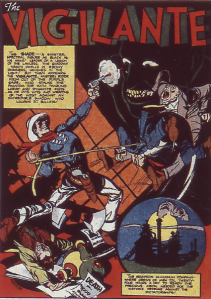 The Vigilante story, by Mort and Mort (Weisinger and Meskin) is much more fun.  It introduces a villain, the Shade, who is not the same as the later, and more famous, Flash villain.  He does spend most of his time in the dark, and seems to have the power to disappear. 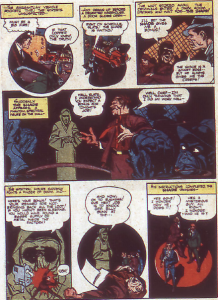 The Shade is pursuing an old man, Billy Gunn, although Gunn has no idea who the Shade is, or why he is after him. 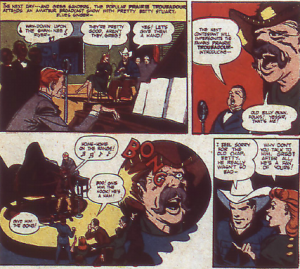 Billy Gunn mets Greg Sanders while appearing on a gong show that he is hosting.  Gunn gets gonged fast, and Greg feels sorry for him.  That woman next to him is Betty Stuart, Greg’s girlfriend, who was actually introduced in his first story, but I forgot about her.

Although Billy Gunn dresses and talks like a cowboy, he is an easterner, who just admires the west.  Still, when Vigilante gets captured by the Shade, it’s Billy who comes to his rescue, and sticks around, becoming his sidekick.

Billy had inherited a mine, and the Shade had been out to kill him and get it.

The Shade returns in the next issue. 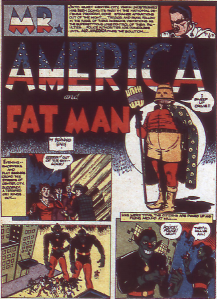 Mr. America and Fat Man fight giant puppets in this story by Fitch and Baily.  It’s actually quite a bit better than the previous sentence would imply. 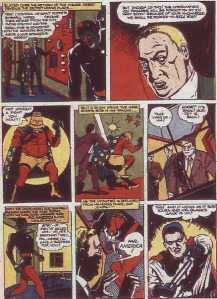 Bob learn that Tex knows his identity in this story.  Which is good, because Tex is not a total idiot.  It is also the final appearance of the flying cape.  Tex uses it to escape from German agents who have been sabotaging factories, making it fly while it is still around his neck.  Although he does get away, I think it likely caused some major neck strain, probably why he retired it.