Superman and the Phantom Zone villain team-up against the deadly Vrangs in Action 549 (Nov. 83).

Bates, Saviuk, Colletta and Marcos do not start this issue off like a team-up, though.  Faora begins by kidnapping Lois Lane.

Curiously, that was done not only to attract Superman’s attention, but to convince him that Zod and Faora mean him no harm.  They inform Superman about the Vrangs finding Argo City, and coming for Earth.  In the extremely distant past, as related in a “World of Krypton” tale from the 70s, the Vrangs had been the alien overlords of Krypton, until overthrown by Val-Lor.  The Vrangs have come seeking vengeance. 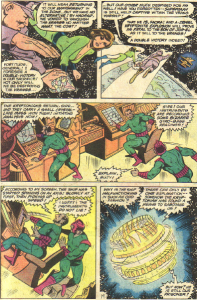 The piece of jewel kryptonite, able to focus and empower the thoughts of the Phantom Zone villains, turns out to be the perfect bomb.

While Superman is still on the Vrang ship, Zod and Faora set off the kryptonite,even though its destruction will force them back into the Zone.  This way, they can get rid of the Vrangs and Superman at once.   Except Superman sees what they are up to, and gets off the ship on time.

So the villains not only save the day, but re-imprrison themselves.

The Phantom Zone villain are back in Action 548 (Oct. 83), in a story by Cary Bates, Alex Saviuk, Vince Colletta and Pablo Marcos. 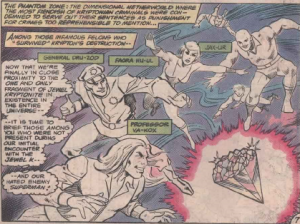 General Zod, Jax-Ur, Professor Vakox (in this story, rendered Va-Kox), and Faora have been tracking the one piece of jewel kryptonite, and find it.  Concentrating their powers on it, Zod and Faora manage to escape to Earth, along with a couple of no-name villains.  We do not see what happens with Jax-Ur and Va-Kox 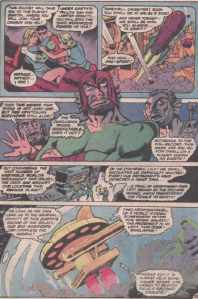 At the same time, an alien race finds the remains of Argo City, and enter it to explore.  They lean of the existence of Superman and Supergirl, and decide to head to Earth. 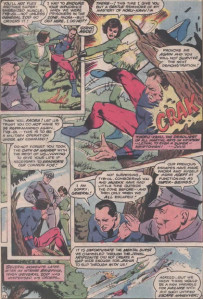 While the Phantom Zone villains prepare to attack Superman, he is busy dealing with some street hoods operating with Kryptonian technology.

The story continues int he next issue.

Action 544 – Luthor loses it all, and Brainiac reboots

Action 544 (June 1983)is a double-sized anniversary issue, with two stories, as Lex Luthor and Brainiac each get an upgrade for the 80s.

Luthor’s story, by Bates, Swan and Anderson, comes first.  It begins as he loses yet another battle with Superman, and his robots send his wounded body off to Lexor. 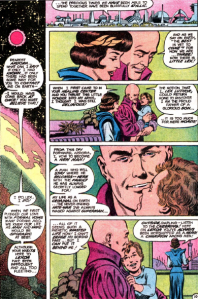 The anti-Luthor revolution that was going on when the planet was last seen must have fizzled out, as he is once again considered a planetary hero.  Ardora has had a son by Lex since the last time he was on Lexor, presumably a visit that did not make it into the comics, or else Ardora had an extremely long gestation.

Lex decides to live out his life as a father and husband on Lexor, and be a good person.  Still, he knows that Superman will one day come for him.  He stumbles into a laboratory form a forgotten, advanced culture, and gets an idea…

Lex performs numerous good deeds for Lexor, including a weird huge pole, going right into the centre of the planet, that will keep it safe from a Krypton-like destruction.

But at night a mystery marauder wreaks havoc.  Who could it be?

Superman shows up to take Lex back to Earth, and he publicly battles Superman in his new armor, which synthesizes a number of power sources, and proves dangerous to Superman.  But the Lexorians recognize the outfit, and are horrified that Lex is the mystery villain.  They shouldn’t be.

Lex fires a blast at Superman that rebounds and hits the rod.  Lex realizes this will destroy his planet.

Luthor tries to save Ardora and his son, but fails. 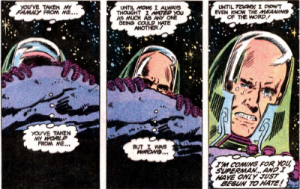 Refusing to admit he had any part in this disaster, he blames Superman, and swears vengeance.  This storyline continues in the pages of Superman.

George Perez’s rendition of the costume looks great,although that headpiece just doesn’t work for me.

Wolfman and Kane handle the Brainiac story, which brings the character back to the aritifical world he had created.  He merges with the central computer, but loses his android body in the process.

After a journey through all of time and space, in non-corporeal, mental form, which basically drives him insane, Brainiac constructs a new body for himself out of the planet. 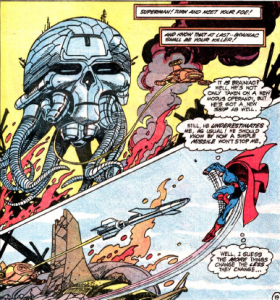 Brainiac also fashions the headship, which I think is the coolest Brainiac-related thing ever. 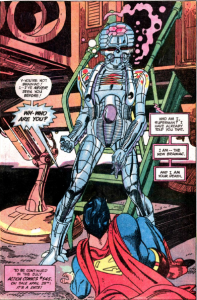 Superman enters the ship, expecting the Brainiac he knows, and is stunned by the mechanical construct in front of him.

Action 512 – the bride of Luthor, and Air Wave gets his first villain 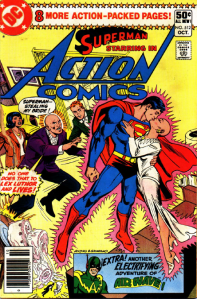 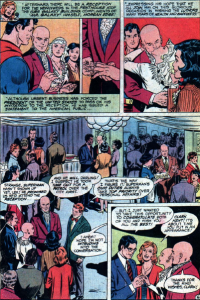 It’s the big wedding day for Lex Luthor and Angela Blake.  Clark Kent, Lois Lane and Lana Lang are among the guests gathered. 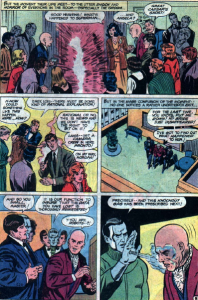 Superman shows up, to give the bride a kiss, but both disappear in a bright blast of light.  Luthor is promptly gassed and taken away by his robots. 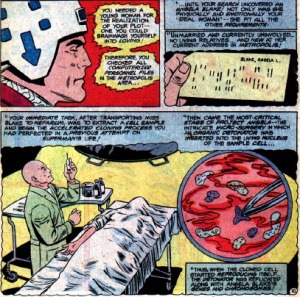 The robots hook Lex up to one of his brain machines, and remind him of his latest scheme.  Angela Blake was all part of a plot to kill Superman.  Lex chose the woman, cloned and killed her.  He had the clone infected with a disease that he also created the cure for.  The woman was chosen to be perfectly appealling to Lex. 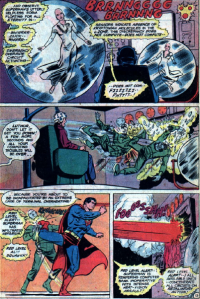 The woman had been built with a teleportation device inside her, which would go off when Superman kissed her.  He escapes from the trap, and makes it back to Luthor’s lab.  He destroys the machines, but Luthor makes no effort to stop him. 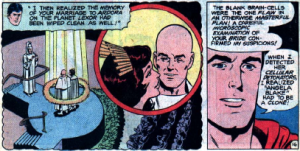 Superman knew something was wrong, because Lex was already married, to Ardora.  I had assumed that, as Ardora had not appeared in years, she was just being edited out of continuity.  Superman “saw” that Lex had had brain cells removed, to forget about Ardora, which got him suspicious of the whole wedding.

This does point out the big flaw in the plan, that it required Superman to forget about Ardora as well.  With his super-memory? Not likely.

Still, Lex is left distraught at the end.  He really did love her. 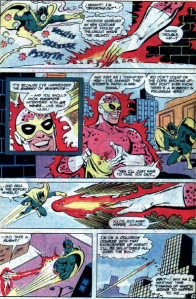 Sunspotter has the power to disrupt electrical devices, which both causes trouble for Air Wave, but also alerts him when the villain is operating. 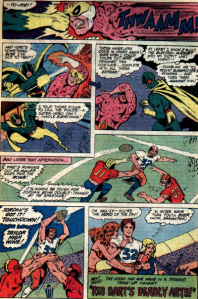 Hal also joins the football team, and has to find a way off of the field when Sunspotter acts in the middle of a game.  He succeeds, and not only defeats the villain but wins the game.  Still, the fact that he had to take off so fast means that Sunspotter is still on the loose.

Action 511 – Superman and Luthor vs Terra-Man, and Air Wave returns

Luthor sets out to prove himself, curing all manner of diseases,and performing a variety of other good deeds.  Morgan Edge is convinced (maybe because he was one a villain himself), and has Lana report on Luthor’s benevolence, but Superman remains suspicious, even after Angela Blake testifies on Luthor’s behalf.

Superman beings Lex to the Fortress of Solitude to perform some tests, and try to assure himself that the change is real.  Terra-Man believes that Luthor has reformed, and is none too happy about it.  He attacks the Fortress, with an alien helper. 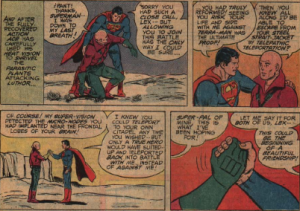 Luthor helps Superman defeat Terra-Man. Or, well, at least he does not help Terra-Man defeat Superman.  At any rate, after the battle Superman decides he doesn’t need any further tests, and is now pals with his old friend. 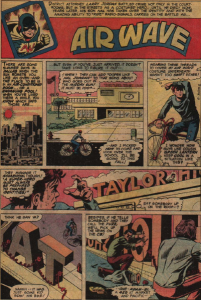 The real DC explosion happens, as the comics all gain an additional eight pages.  Air Wave and the Atom have the series here revived, and are joined by Aquaman in a rotation that will run for the next few years.

Rozakis, Saviuk and Chiaramonte pick up as if the series had never stopped.  Likely because this was written and drawn before the previous run was cancelled.

Karen Peterson discovers Hal’s young cousins playing with his costume, and they tear it.  She had already figured out his identity, and decides to fix, and improve, his costume.

Hal and Karen go to a theme park, and when robbers mess up their date, Hal gets into his new costume without even noticing the difference, until he finds handcuffs in a pocket that wasn’t there before.  He has no idea where the new costume came from, and still thinks he has fooled Karen about who he is. 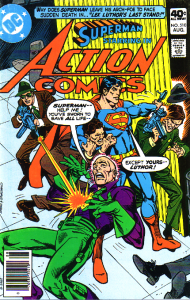 Luthor switches sides in Action 510 (Aug. 80), in this story by Bates, Swan and Chiaramonte. 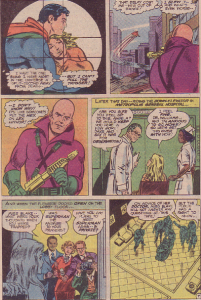 The story opens with an elaborate trap Luthor sets.  But when he gets Superman dead in his sights, he does not fire, distracted by the woman he is carrying to safety. 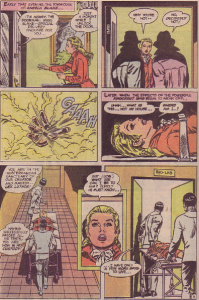 So he does the reasonable thing and has Angela Blake investigated by his robots, Karel and Capek.  He scans her, to make sure she is human, and then kidnaps her and brings her to a hospital.  Dating is not something Luthor excels at.

Luthor orchestrates a round up of the major gang bosses in Metropolis.  Superman is very suspicious of his motives, even moreso when he finds that “Luthor” is really one of his robots.  But the robot insists, on his master’s behalf, that Luthor has reformed out of love.

We learn that Angela Blake had a terminal illness, which had cost her her hair.  Luthor has cured her, and professes his love for her. 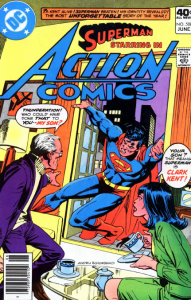 Bates, Swan and Chiaramonte do not disappoint with the concluding half of the Jonathan Kent story in Action 508 (June 1980).

Starshine has “asked” for everyone over 30 to leave Metropolis, and people felt compelled to obey – except for Jonathan Kent.  April and May Marigold, who live in the same apartment building as Clark Kent, make a rare cameo, amazed that someone as old as Kent is still in the city.

At this point, we learn what is going on.  This visit by Jonathan Kent is a gift given to him by two powerful alien beings who he had aided in the pages of New Adventures of Superboy, a story that came out last month, the same as the first half of this story. 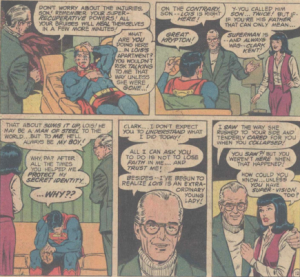 Superman tries to stop Starshine, but has no luck.  But his father has learned of his connection to Starshine, a result of the alien gift.  He does not explain it, but does reveal Superman’s identity to Lois Lane.  Superman is stunned, but Kent is remarkably unconcerned. 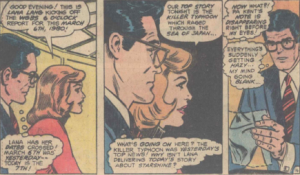 The following day, Clark returns to the studio, but as Lana begins her broadcast, he notices she is saying the same thing as the day before.  His father left him a note, which thanks him for the visit, but the note disappears in his hands.  The entire visit will be remembered by no except Jonathan Kent’s spirit. 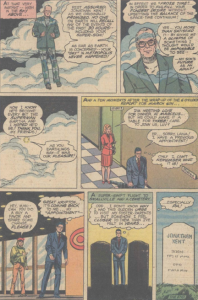 It makes for a really touching ending.  Starshine appears, powerless and poor, begging outside the studio, but Clark doesn’t notice.  He just knows he wants to spend some time at his father’s grave.