Black Canary gets the cover of Action 609, as her series launches.

Dinah Lance had been a regular supporting character in Green Arrow for the last couple of years, but had not been seen in costume since she left the Justice League.  She does burn her old costume during this story, by Sharon Wright, Randy DuBurke and Pablo Marcos, but does not put on her old one. 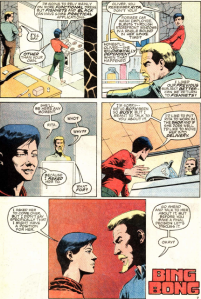 Sadly, neither the story nor the art on this serial are really good.  This first chapter is ok, as it largely just introduces Dinah and Oliver, and brings back Rita, a recovering addict who appeared in an issue of Green Arrow.

Another fun Deadman chapter, by Baron, Jurgens and DeZuniga, as he attends an embassy ball in the body of the director of the CIA.

The Devil has followed Deadman out of the jar, and they wind up in the bodies of Reagan and Gorbachev, as Deadman tries to find out what the devil is up to.

Things get even crazier as they jump to Nancy Reagan and Raisa Gorbachev, who begin a cat fight in front of the crowd and media.

We get to see some of the personal life of one of the new Secret Six members in this Pasko and Spiegle chapter.  There is some drama with the guy and his ex-wife, as the rest of the team try to figure out what happened to Rafael.

Mockingbird has the answers, as he sends more of his people to capture Rafael. 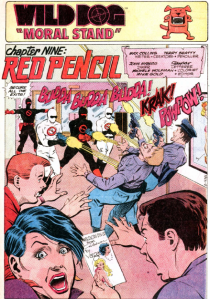 Wild Dog’s first storyline comes to an end in this chapter, by Collins, Beatty and Nyberg.

Despite all of Layman’s actions, his people will not turn on him, and the only possible witness to his crimes in Wild Dog, who has no legal standing. So even though the villain gets defeated by the hero, he remains free and in power. 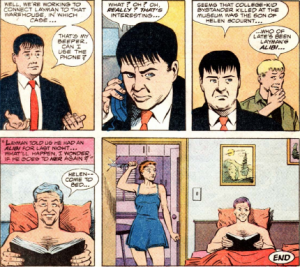 Well, at least until the woman he has seduced finds out that her son was one of the victims of his terrorists.

A madman wielding a sword is introduced at the top of the Green Lantern installment this month, by David, Smith and Bulanadi. 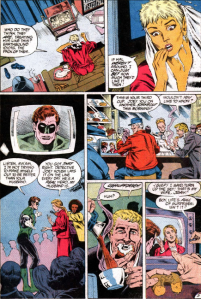 Hal is getting just toasted on the Oprah show.  Called crazy for not having fear, his courage is also then challenged, because of the ring that protects him from injury.  Arisia probably regrets coaxing him to go on the show. 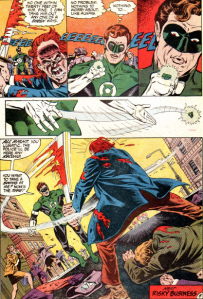 And the show clearly has quite the effect on Hal, as he tosses his ring away at the end, to face the crazed killer with his bare hands.

Action 608 – Green Lantern on Oprah, Wild Dog in trouble, the Secret Six have trust issues, Deadman gets out of the jar, and Blackhawk ends 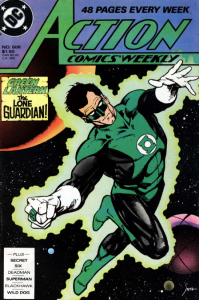 Green Lantern looks very serious on the cover of Action 608. 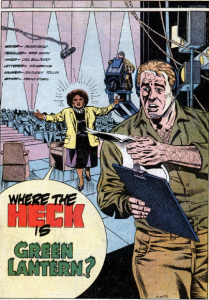 Peter David takes over the scripting on Green Lantern, with Tod Smith and Danny Bulanadi on art.

Hal is quite late for the taping, to Oprah’s dismay.  He gets stopped along the way, fighting crime.  He does make it, though, and begins to answer Oprah’s questions.  When he tells the audience that he was chosen to be a Green Lantern because he is without fear, they break out in laughter, to his and Arisia’s dismay. 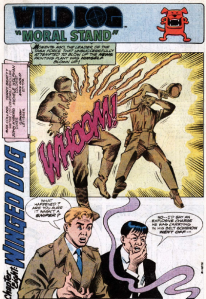 Layman goes up another notch of evil in this Wild Dog chapter, by Collins, Beatty and Nyberg. Layman has implanted bombs in the suits of his men, to kill them before they can talk against him.

Layman also gets the follower he has seduced to provide him an alibi.

Meanwhile, Jack has been discovered to be friends with the reporter, and the investigating police officer.  Too dangerous to keep in the group, Jack is on the death list now.

Mockingbird tries to turn the Secret Six against Rafael, but the young man bolts before the team can decide who to believe, in this Pasko/Spiegle story.

As the Six debate, and decide that Rafael is more trustworthy than Mockingbird, we also see the set-up for their next mission, with contaminated pork products.

Deadman makes it to the top of the mountain, and out of the hell jar in this chapter of the Baron/Jurgens/DeZuniga epic. 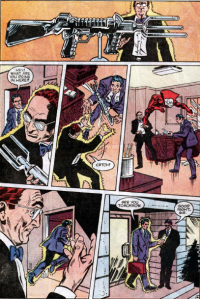 Deadman does some body jumping to get out of the facility, and winds up in the body of the director of the CIA.  He has a big embassy function to attend that evening, which Deadman decides to attend.

Grell, Burchett and Marcos bring the first Blackhawk storyline to a close in this issue.

Massie gets killed by the Red Dragon, and Cynthia, really a nun, reveals that she came not for the treasure, but for a stolen religious artifact. 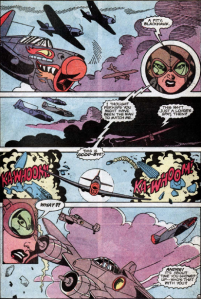 That doesn’t matter much to Red Dragon, who scrambles her air fleet to take down Janos.  But the other Blackhawks arrive to save the day.  Well, Andre and Chuck do.

Blackhawk returns for another story arc further down the road.