Dini, Nguyen and Fridolfs conspire on a decent mystery in Detective 845 (Aug. 08). 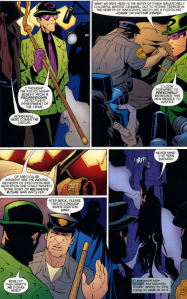 There appears to be a new serial killer in town, after a number of apparently random murders. Batman is on the case, and so is the Riddler, who proclaims publicly that he will bring the killer in.

Batman has a brief scene with Catwoman.  This follows her return to Earth after events in Salvation Run, and her own comic.  He tries to enlist her help against the serial killer, but she is more interested in finding out about his romances with Zatanna and Jezebel Jet (who has been appearing in the pages of Batman).  She dramatically takes off, and Batman knows she wants him to follow her.  But tonight he has other concerns.

Not a great appearance for Catwoman, frankly. She comes off as jealous and childish.

But the scene is followed by a really wonderful one, as Batman goes on the net and discusses the case with others.  Although the various people talking have no idea who the others are, we see that the conversation includes Bruce, the Riddler, Oracle and Detective Chimp. 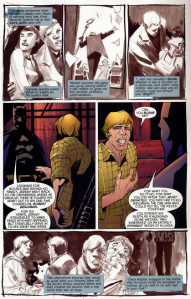 The solution is actually quite sad. It was all a trap for the Riddler, laid by the widower of one of his victims.  The first victim had been his psychiatrist, who could have informed the police.  The rest were random, with clues designed to draw the Riddler to where he could be killed.  Batman intervenes, but has more sympathy for the killer than for the Riddler.