Action 486 – Superman’s time trip troubles, and Luthor gets a birthday present for Val 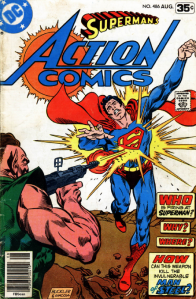 I don’t much care for the cover of Action 486 (Aug. 78), or the Superman story by Conway, George Tuska and Vince Colletta, but the back-up story makes this an issue I have to include.

Superman travels through time to the far future, and winds up stuck on Earth under a red sun, with no powers.  The people live in squalor, and under the dominance of an alien race who have encircled the Earth.

Superman eventually realizes that their shelters are actually very old rocket ships. He gets them functional again, blasting through the alien ring of ships, freeing the Earth.  He uses the ship to get far enough away to regain his powers, and heads back home.

But the story I want to talk about is the Lex Luthor tale, by Elizabeth Smith, Kurt Schaffenberger and Frank McLaughlin.

The story features his sister Lena, who had last appeared in the early 70s in Superman Family, and returns in that book in a few more years.  Val Colby also makes an extremely rare appearance, Lena’s son, and Luthor’s nephew.  It’s Val’s birthday, and Lex breaks out of prison to deliver his gift.  He even ensures he gets caught, to get away before Lena or Val spot him.

This is probably the most pleasant and selfless Lex Luthor story ever.