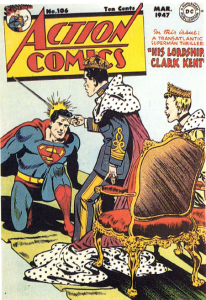 John Sikela is the artist on the Superman story in Action 106 (March 1947), in which Clark learns a possible origin for himself.

Clark is approached by lawyers representing a British lord, whose son was kidnapped many years earlier. They have some loose evidence linking the boy and Clark.  Clark does not believe he is really British, but at this point has no idea of his actual origin, beyond being found in a rocket by the Kents.

Clark heads to England to assume the role of heir, and gets involved in a dispute with the miners who work on the lord’s land.  Clark even takes a seat in the House of Lords, and votes for a bill that will ensure the safety of the miners.  Lois accompanies him, but is really just a distraction in the story. 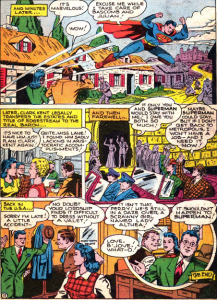 The story reaches a very happy ending, with the leader of the miners revealed as the actual heir.  Superman builds a new mining town, and moves the castle so that everyone can live happily together.