Action 638 – Speedy confronts intolerance, the Demon takes the bait, a new hero gets a name, Superman addresses his flock, Phantom Lady in combat, and Wild Dog loses his cool

Yes, that really is a Kirby Demon cover on Action 638.

Speedy continues his search for a missing man in this Verheiden. Williams and McLaughlin story.

Roy goes to question the man’s brother, and action movie star.  When Speedy tells the man his brother has AIDS, the man accuses Speedy of lying to create a scandal. 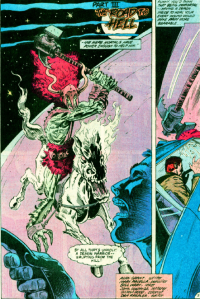 Grant, Pacella and Wray continue the Demon story, as Jason Blood calls on Etrigan to fight the monster that emerges from Sillbury Hill. 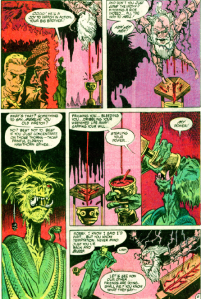 Glenda Mark and Randu Singh also head to England, concerned about Jason.  None of the three realize that they are doing exactly what Morgan le Fay intended, but we learn this, as does Merlin, as he is being tortured.

Rozakis, DeStefano and Schaffenberger give the new guy a hero name in this Hero Hotline chapter, as he heads out on his first mission, to get a cat out of a tree.

Nancy and Sluggo appear to cameo as Hot Shot (as he comes to be known) shoots fire at the poor cat. It works.  But geez. 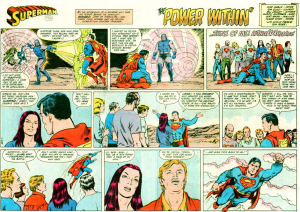 Darkseid heads back to Apokolips, to have fun torturing and tormenting the Consortium.  Superman is left to address his followers, insisting that they should not treat him as a god.

It doesn’t really work.  We see this religious cult again following the Death of Superman.

Phantom Lady continues her hunt for Guerreheart, the man causing problems for her father, in this chapter, by Strazewski, Austen and Martin.

Phantom Lady’s holographic images prove quite useful as she stands up against armed men.  She even manages to capture one.

Wild Dog is in a bad mood in this story, by Collins, Beatty and Nyberg, after the shooting of the child.  While his friends console him, and debate the situation, Wild Dog decides the time is right for drastic action.

Wild Dog bursts into a crack house, and sets it on fire.