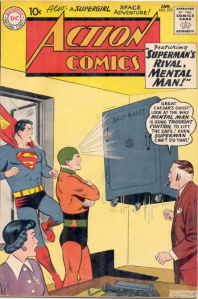 Siegel, Swan and Kaye create an interesting sort of meta-story in Action 272 (Jan. 61). 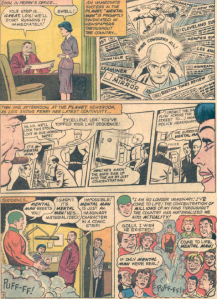 Lois Lane begins drawing a comic strip about a super-hero, Mental Man, and the woman who loves him, Laura Lovely.  She does this for her own amusement, but Perry White is impressed, and begins running it in the Daily Planet.  It becomes a huge success, but no one expects it when Mental Man suddenly comes to life, evoked into existence by all the people who have been reading the strip. 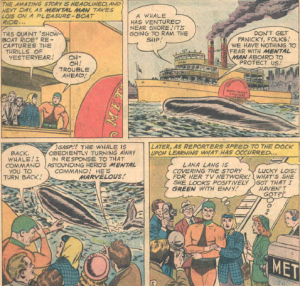 Mental Man and Lois Lane immediately hit it off, and she is by his side as he uses his mental powers to stop crime and perform other super-deeds.  Even Lana Lang and Lucy Lane are jealous of her.  No one seems to care about Superman anymore. 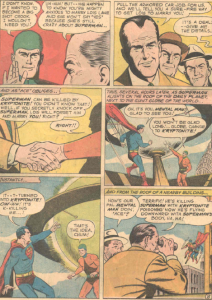 But Mental Man can sense Lois Lane’s feelings for Superman.  Some hoodlums give him the secret on how to kill Superman, and Mental Man turns the Daily Planet globe into kryptonite, killing him.

But once the villains start to go wild, the whole thing is revealed as a hoax intended to draw them out.  Mental Man was really Aquaman, pulling off the various super-deeds through a combination of his own powers, Superman’s, and help from Aqualad.

In an interesting coda, Mental Man and Laura Lovely get married in the newspaper strip, and the readers lose interest.  The strip gets cancelled.

This so clearly reflects the belief at DC, that Superman and Lois must stay separate to maintain reader interest.

Action 270 – Superman gets old, again, and Supergirl enters the Batcave 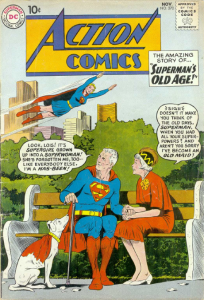 Binder and Swan are joined by John Forte on inks, as they take another journey into Superman’s old age in Action 270 (Nov. 60). 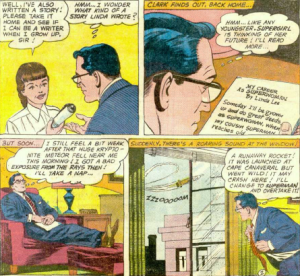 Clark Kent pays a visit to the Midvale Orphanage, encouraging the children to write.  Linda shows him a creative writing piece she has done, envisioning her life as Supergirl.  Clark then goes to sleep, so what follows is obviously a dream. 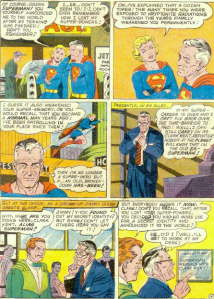 In the dream, Superman’s powers have faded due to repeated kryptonite exposure.  His identity is now known to the world, while Superwoman operates in his place.  Jimmy Olsen is the editor of the Daily Planet, Perry White having died, and is married to Lucy Lane, making her first appearance in Action. 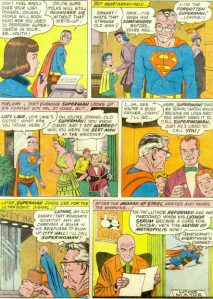 Linda works at Clark’s old job at the Planet, so her secret identity has even replaced his.  Even Lex Luthor has retired. 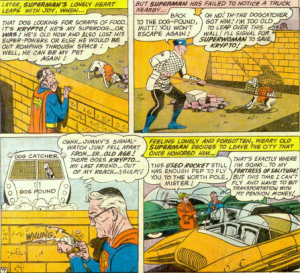 Superman finds Krypto, also powerless and being taken away by the dog catcher. 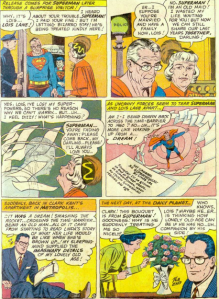 After seeing that Lana Lang has married a millionaire, Superman finally seeks out Lois Lane, who has spent her entire life alone.

One heck of a downer dream, there, Clark.  Maybe it’s trying to tell you something.  Like, don’t base your entire persona on your powers, and take love where you can find it. 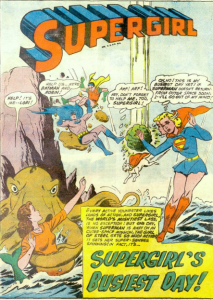 Siegel and Mooney put Supergirl through the paces in this guest-star packed story. 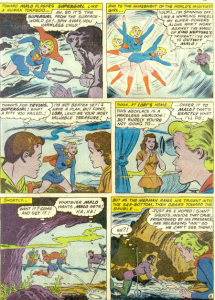 Supergirl spends the day rushing from one crisis to another.  Lori Lemaris beckons her to Atlantis, where she defeats a destructive merman, Malo.  Ronal and Jerri cameo in the scene.

Batman and Robin also call on her for help, when they are trapped in the Batcave by a cave-in. 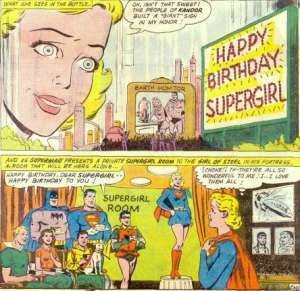 As it turns out, none of the emergencies were real. It was all a weird “gift” for Supergirl’s 16th birthday, which all the guests show up to attend.  A bit nicer is the tribute by the residents of Kandor.