Action 63 – Superman loses his memory, the Dummy times 3, the Three Aces end, and Americommando kicks Hitler in the face

Quite the dramatic wartime cover for Action 63 (Aug.43). 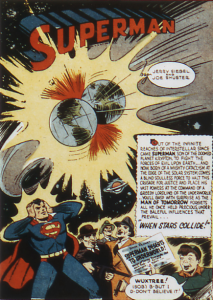 Don Cameron and Ira Yarborough come up with a new way to weaken Superman in this story. 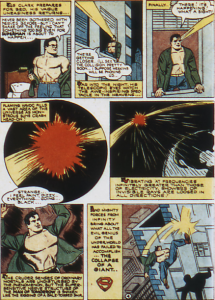 A collision of two stars in space sends cosmic radiation towards the Earth.  When it reaches the planet, Superman is literally knocked off his feet by it.  He falls to the street, and winds up with no memory of who he is.

Some hoods see him fall, but as he is in his Clark Kent clothes, do not realize it is Superman.  But his strength and resilience, and lack of memory, make the hoods convince their hapless victim that he can impersonate Superman.  So Superman winds up joining a criminal gang.  Superman’s ethics do cause him doubts, but he believes he could not possibly be the real Superman, or he would not have lost his memory.

Lois Lane gets involved, distressed to see Superman committing crimes.  A falling meteor, which he shatters, restores his memory.  Superman rounds up the thieves, and pretends that his time with them was  just an act to gain evidence.

A pretty lame explanation, but people are glad to accept it.

With no kryptonite yet, this story was an early attempt at weakening or altering his powers.

Cameron and Meskin bring back the Dummy to pester Vigilante in this story.

The Dummy is now part of an act, with two other identically dressed men – or are they actually dummies?  The story introduces this idea, but really doesn’t play on it much until the last few pages.  The set-up also has the Dummy and Greg Sanders performing at the same venue the same evening, but aside from the Vigilante seeing the three Dummies perform, nothing happens on that night either. 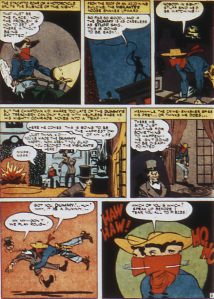 Stuff gets captured, in typical sidekick fashion, and Vigilante discovers that the middle dummy really is a dummy.  The tallest one seems to be a real person, but we never get that confirmed, or find out who he is.  Definitely better in concept than in execution. 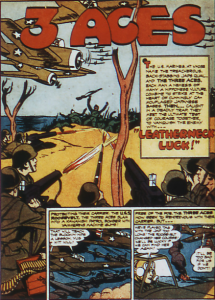 The Three Aces have their final adventure in this issue, battling the Japanese. 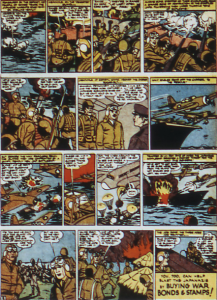 It’s a serviceable war story.  They hold off a Japanese assault.  All seems well for the three men, but since their series ends here, and they are never seen again, I believe this was their last successful mission, and they died on their next one.  They are all old enough to have fought in the World War 1, so their reaction time would not have been the best. Kind of amazing they survived in the war as long as they did.

After travelling around through occupied Europe and helping out the resistance groups, the Americommando returns to Germany in this story by Greene and Baily.

This story has Americommando’s greatest challenge, to steal plans that Hitler carries on himself at all times.  He succeeds by turning Hitler’s propaganda against him accepting a challenge to fight a Nazi champion in the ring.  Actual German heavyweight champion Max Schmelling appears in the story, although he is not the one to fight Tex.  This is sort of sad, part of the anti-Schmelling view the media played up during the war.  In fact, though he was drafted into the service, Schmelling was not a Nazi, and even risked his life to save two Jewish children.  At any rate, Tex triumphs in the ring, and not only escapes the Nazis after the match, but kicks Hitler in the face while stealing the plans. 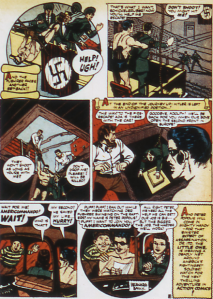 Tex gets a new sidekick in this issue as well, a Greek prisoner of war, Poppy, who is his assistant during the match, provided by the Nazis.  Poppy joins Tex on his next mission, in Russia, but is not seen after that.  I expect he returned home and worked with the resistance until war`s end.