Action 546 – Superman, the Justice League and the New Teen Titans vs Brainiac

Marv Wolfman and Gil Kane pull out the stops for Action 546 (Aug. 83), the conclusion of the new Brainiac saga.

Superman gathers the Justice League and , unusually, the New Teen Titans.  They were the hottest selling property DC had at the time, and Wolfman wrote their comic.  But it’s still not like Superman called on the Teen Titans from time to time. 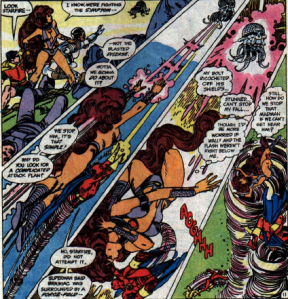 Lois Lane gets one scene in the story, back on the farm of her rarely appearing parents, Sam and Ella Lane.  Superman talked her out of staying on assignment in the Middle East, and she is furious to see that Lana Lang is doing the interview she worked so long at. 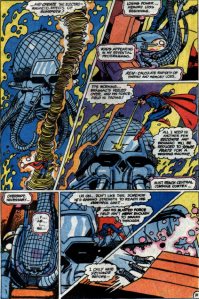 While the others deal with the armies, Superman confronts Brainiac himself.  He manages to draw out solar flares, which disrupt Brainiac’s headship, and render him vulnerable.  He retreats, to fight another day.  And once Brainiac leaves, his armies, no longer mind controlled, back down.

Yup, Brainiac is definitely more of a threat than he was before.

Bates, Swan and Chairamonte begin a four-part story that pits Superman against Amazo, the one-man Justice League in Action 480 (Feb. 78).

The story gets bang into the action, with little build-up.  Superman is relaxing on the Justice League satellite, when Amazo suddenly bursts out of his cell and through the floor, getting into a fight with Superman that blasts them out of the satellite and into space.

The Justice League alert goes off, and the whole team show up.  This is not such a good thing, as Aquaman, Atom, Batman, Black Canary, Elongated Man, Flash, Green Arrow, Green Lantern, Hawkman, Hawkgirl, and Red Tornado all wind up trapped in the satellite by Amazo, giving him free reign against Superman.

A mysterious “Professor Ives” is also brought in to the story.

With Amazo on the loose, and his own powers waning, Superman needs a way to get Clark out of the way, and leave him free.  Morgan Edge is holding a draw to see who goes on a particular assignment out of town, and Clark hypnotizes everyone to think he was chosen.  As well as Lois, Jimmy and Steve Lombard, Lana Lang is part of the draw, having recently been hired to WGBS in the pages of Superman.

Professor Ives turns out to be Professor Ivo, who Amazo hates for having created him.  Superman desperately fights to save Ivo as his powers fade before Amazo.

Throughout this storyline there is nothing of Ivo’s usual two qualities, his quest for immortality, and disfigurements caused by the quest.

Maggin, Swan and Blaisdel give Superman a big line up of allies and enemies in Action 443 (Jan. 75).

The story opens in a very disorienting way, with Superman as a nebbishy newscaster, picked on by Steve Lombard and rejected by Lois Lane.

While Clark Kent is the one leaping into heroic action against Queen Bee and her drones.

Queen Bee is leading a host of villains against the Justice League of America.  Most of them are regularly appearing big names – Chronos, Sinestro, Ocean Mchroaster, Grodd and Brainiac.  Matt Hagen makes his first appearance in over a decade as Clayface.  Merlyn and the Harpy are both newcomers. Harpy, the villain assigned to Black Canary, had appeared in Green Lantern, while Merlyn, who would go on to become a regular Green Arrow enemy, had only debuted recently in Justice League of America. 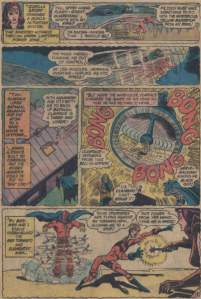 The assembled villains had already triumphed over the rest of the Justice League, and in flashback we see them taking down Batman, Green Lantern, Green Arrow, Aquaman, Black Canary, Elongated Man, Aquaman, Atom and Red Tornado.  At this point, Wonder Woman and Hawkman were not members of the JLA.

Superman has used a Kandorian machine to reverse people’s perceptions of Superman and Clark Kent, simply to puzzle the villains.  They bring him aboard their ship, which is what he wants.  As he struggles with Grodd and Clayface, his heat vision pierces the capsule the Flash is being held in, and the Flash exploits this, and frees himself, and the rest of the League.

A lot of characters.  The story is fun, but I cannot honestly say it makes the most of its cast.