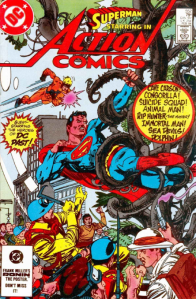 Wolfman and Kane begin a two-part story in Action 552 (Feb. 84) which sees the formation of an unusual grouping, the Forgotten Heroes.  Much of this issue simply re-introduces the various characters.  In case readers had, you know, forgotten them.

Vandal Savage has had Superman infected with a disease that causes him to emit spores of deadly prehistoric plant life.  It takes Superman a long time to figure this out.

As he does, we get to meet the members of this new group.  Each one has had an encounter with one of a number of mysterious golden pyramids.  Cave Carson starts off with his story, followed by Animal Man, making his first appearance since showing up in Wonder Woman a couple of years earlier.

Rick Flagg speaks on behalf of the Suicide Squad, who came across a pyramid while hunting the Yeti. Flagg had not appeared since the early 60s. Dane Dorrance returns, talking about the pyramid the Sea Devils found, and also his encounter with the mysterious Dolphin.  This marks Dolphin’s third appearance, following her introduction in Showcase in the late 60s, and a small role in Showcase 100 in the mid 70s.

Congo Bill and Congorilla return to the pages of Action as well, as the ape came across a pyramid in Africa.  Both had last been seen a few years earlier in DC Comics Presents.

Rip Hunter is the last to tell his story, of how he and his crew went in the very distant past, and found a pyramid in the time before even the dinosaurs.

Superman finally twigs in that he is creating the killer plant life. 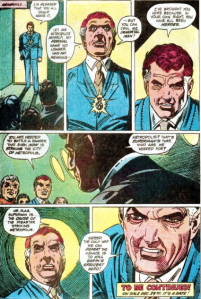 And Immortal Man, not seen since his last story in Strange Adventures in the mid 60s, announces that the only way the Forgotten Heroes can save the world is to kill Superman.

Wolfman and Kane present the penultimate chapter in the split Superman story in Action 540 (Feb. 83). 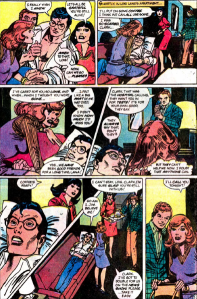 Clark recovers, just as knife is going in for the autopsy.  But he can tell his other self is severely weakened, and he will die if the other Superman does.  Perry and Jimmy are happy that Clark is alive, but Lana is hugely affected.  When she thought he had died, she realizes how much Clark had meant to her throughout the years.  Lois, on the other hand, just takes the opportunity to challenge him again about being Superman. 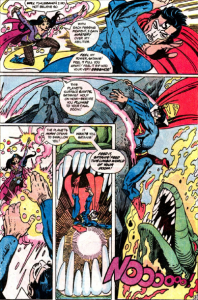 Back int he past, Syrene and the merged Satanis/Superman continue their battle throughout the issue, the dynamic segments neatly spaced through the tale.

Lois talks about a series she is doing on Forgotten Heroes.  She references Cave Carson, as well as the Sea Devils and Suicide Squad, Ragman, Bwana Beast and Vigilante.  But the one that grabs Superman’s attention is Rip Hunter, Time Master, and he seeks out Rip and his team, finding them all unusually aged.  This is Rip’s first appearance since appearing in DC Comics Presents a couple of years earlier. 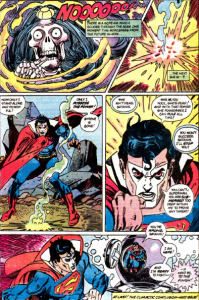 Perhaps because it is not expected, the magical defenses that have kept Superman and his friends from the past are no barrier to Rip Hunter, and he delivers Superman to his merged double just as Satanis/Superman defeats Syrene.

Aquaman’s series comes to an end in this story by Bob Rozakis, Alex Saviuk and Joe Giella.

Ironically, Aquaman himself winds up sidelined, as Mera and V’lanna battle over him.  Mera wins, and V’lanna kills herself, rather than be executed for treason.  Mera is expected to stay in Xebel as queen, but chooses to return to Earth with Aquaman.

So a nice happy ending for these two, and the final back-up story Aquaman will have.  It takes three more years before he gets his own mini-series, and a few of those before he gains his own book again. 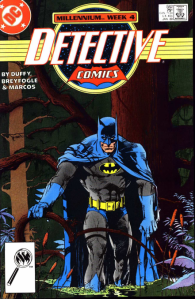 Detective 582 (Jan. 88) is not merely a Millenium crossover, it was also part of a four issue telling of the heroes’ invasion of the Manhunter temple in the Louisiana bayou.  The same week this issue came out, The Spectre, Suicide Squad and Captain Atom also had stories of the attack.  Only this issue really crosses over with the others, which remain largely separate tales.

Mary Jo Duffy managed to pull off a good issue, despite all the needed tie-ins, with Norm Breyfogle back on the pencils, and Pablo Marcos on the inks. 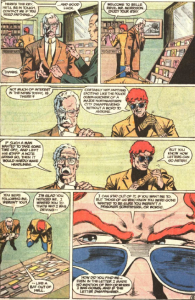 The first part of the story picks up from the previous issue of Batman, in which Commissioner Gordon had been replaced by a Manhunter robot.  Batman tracks the actual Gordon, and explains to him the impersonation, which allows the entire plot of Millenium to be explained.  It turns out Gordon was intentionally lured away, and was being set up to be killed, though Batman prevents that.

Batman runs into Jim Corrigan and Kim Liang, in a passage mirrored in the Spectre.  Corrigan accompanies Batman to the temple, and though we do not see the Spectre, the heroes see the results of his work, all the decommissioned Manhunter robots.

Batman and Corrigan find the place where the Manhunters are keeping the human prisoners, and as Corrigan frees them, Batman penetrates to the heart of the temple.  He comes across Karin Grace, learning of her plans to blow up the temple, but more importantly, learning of the existence of the Suicide Squad.

And though Captain Atom does not appear, the lack of radiation, and snowfall, at the end of the story reference events in his book.

It’s all a bit frantic, but really, far better than it might have been.