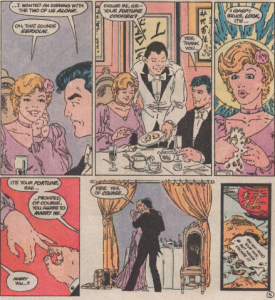 Things have been going very well between Bruce and Rachel.  So well that he proposes, and she accepts. 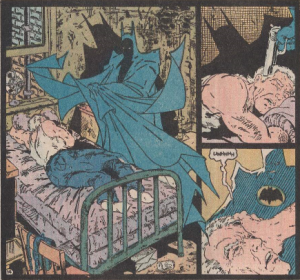 Things are not going so well between Bruce and Joe Chill.  As Batman he rescues Chill after an explosion injures him.  The panel in which he holds a gun to the sleeping man’s head is not given the prominence I would have expected, but the scene is still disturbing.

After Chill wakes up, Batman begins to argue with him, eventually unmasking and revealing that Chill killed his parents.  It seems that Batman might actually kill Joe Chill, but the Reaper shows up and murders Chill instead.

This leads to the final battle between Batman and the Reaper, which ends with Judson Caspian unmasked, and falling to his death.  Rachel, distraught over the revelation that her father was the murderous vigilante, calls off the engagement.

It’s certainly no Batman: Year One, but there are some good things in this storyline.  Rachel and the Reaper would both return in a couple of years, in the Batman – Full Circle one-shot.   The story was also the basis for the Batman – Mask of the Phantasm animated movie.

Detective 577 – Batman and Joe Chill vs the Reaper 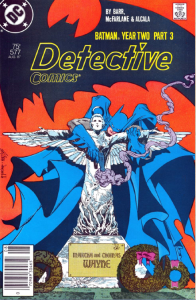 Todd McFarlane really loves drawing capes.  And he’s really good at it.  Good enough that Batman’s cape is worthy of the two page spread it gets in this issue.

Bruce is still oblivious to the Reaper’s identity, so his romance with Rachel continues, with the blessing of the equally oblivious Judson.

Bruce is far from oblivious about Joe Chill though, and has a hard time working alongside him, even though Chill helps him against the Reaper.

The story conlcludes next issue.

Bruce practices using a gun, but it’s not a weapon he feels comfortable with, and he doesn’t do very well with it.

This issue also gives the background to the Reaper.  The story is consciously parallel to Batman’s origin, as Rachel and her father witnessed the senseless slaying of her mother.  Judson was also wounded, although he recovered in time, and adopted the guise of the Reaper to avenge his wife’s death.  The similar childhood trauma of Rachel and Bruce helps bring them together. 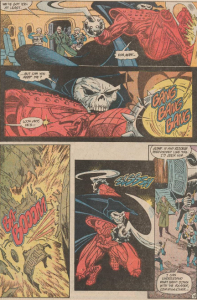 The Reaper appears for more threatening with McFarlane and Alcala rendering him.  He also is proving quite effective against Gotham’s underworld.  So much so that the gangs make common cause with Batman to take down the Reaper. 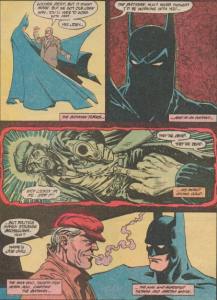 In a bitterly ironic twist, Joe Chill is assigned to be Batman’s gun man on behalf of the mob. Chill is completely unaware that he was the one who killed Batman’s parents.