Action 459 – Superman vs Blackrock, and the Private Life of Clark Kent

Maggin, Swan and Oskner conclude the Blackrock introduction storyline in Action 459 (May 1976).

Superman has come to terms with Blackrock operating in Metropolis, even though Morgan Edge continues to be furious, particularly at how Blackrock always gives his interviews to Lola Barnett at UBC.  Clark points out some of the reasons for Lola changing networks.

Superman loses his patience with Blackrock during a robbery by teleporting thieves.  The radio waves Blackrock uses short out the tech, preventing Superman from following them.  Blackrock does not take well to being criticized, and the two start to fight.

Superman follows Blackrock back to UBC, but loses track of him.  He goes to confront Tanner, certain that the man must know something about the hero, but is stunned to discover that Tanner himself is Blackrock.  And Tanner does not even know it.  Silverstone felt that only Tanner himself could live up to what he wanted Blackrock to be, and turned him into the hero. 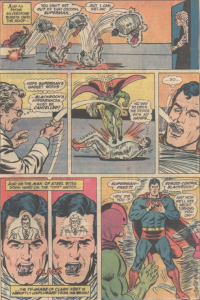 But with Blackrock now out of control, Silverstone works with Superman to turn him off.

Tanner is left with no memory of being Blackrock.  But Blackrock does return in a couple of years, in the pages of Superman.

The Private Life of Clark Kent begins as a rotating feature in Action. These stories, which deal with the non-Superman side of his life, began as a back-up in Superman.  Here, this story begins a series that deals not only with Clark Kent, but with the personal lives of many of the supporting cast.

In this story, by Bridwell, Swan and Oskner, Morgan Edge demands that Clark find out what has happened to a prominent boxer.  Steve Lombard has washed out on finding any information.

Clark pretty much stumbles across this one, winding up in a taxi that was meant to be part of a ransom pay-off.  He follows the money, and frees the champ, meant to resemble Muhammed Ali, and winds up with a personal on-camera interview, while a pained Lombard looks on.

A rival network, and all that entails, are introduced by Maggin, Swan and Blaisdel in Action 458 (April 1976).

UBC has been causing a lot of problems for Morgan Edge.  We discover that they have lured a number of anchors away from WGBS, including Lola Barnett.  But the one thing WGBS has that UBC doesn’t is a super-hero.  The head of the network, Tanner, orders the company scientist, Peter Silverstone, to create one.  We see Silverstone fashion the gear and the costume, and decide on who the person inside must be.

But neither the reader nor Superman has any idea who is beneath the mask as this new hero appears, during a robbery by a vacuum truck.  Superman mistakes the man for a criminal, and they wind up in a brief fight.  This new hero can travel through the airwaves, and channel them through a miniature tv aerial he carries.

The story uses parallel structure well, as in the second robbery by the vacuum truck.  Superman follows the radio control waves to the truck’s operator, while the new hero deals with the truck directly. Both believe they are responsible for the victory. 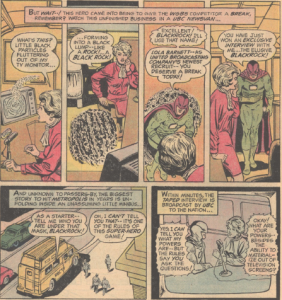 The new hero than manifests in Lola Barnett’s office at UBC, and she christens him Blackrock.  About time. Was getting tedious avoiding using his name.

The issue concludes with some more pleasing parallel structure, as Edge and Tanner both freak out, wanting to know more about Blackrock. 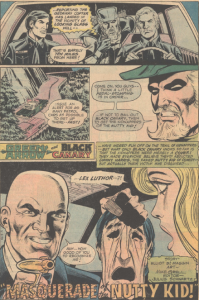 Black Canary really loses it in the final back-up story that she shares with Green Arrow, by Maggin and Grell.

Luthor attempts to hypnotize Canary into killing Green Arrow, but it backfires, and she gets hypnotized into killing Luthor, and really tries.  He barely escapes with his life.

When Green Arrow finally arrives, he is far more concerned with calming Dinah down, and bringing her back to herself.  Luthor gets away, and a note informs us that he can be found next in the Joker’s book, where they work together.  For part of it.

As for Green Arrow and Black Canary, they head back into Green Lantern’s series, as that gets revived.

And the Nutty Kid actually does sort of resemble Jerry Lewis in the final panel.