Detective 863 – Batwoman ends, and the Question finds the big guy

Scott Kolins joins Greg Rucka and Jock for Batwoman’s final story in Detective, in issue 863 (May 2010). 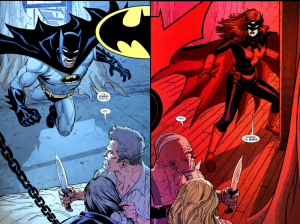 Batman and Batwoman continue on their separate, but similar, cases, and the art does all it possibly can to parallel the two stories. 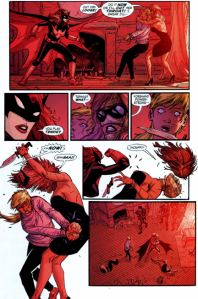 I particularly like Kate’s tennis suggestion, which allows Bette to free herself from Cutter, and uses the skills she is known to have.

The story ends as Bette confronts Kate.  She knows her cousin is Batwoman, and reveals herself to be Flamebird.  She has found the hero she needed.

Batwoman moves into her own book, bringing Bette along with her, but it’s launch is delayed until the New 52.

The Huntress and Question find prison on Oolong Island not as bad as they feared in this story, by Rucka and Hamner. 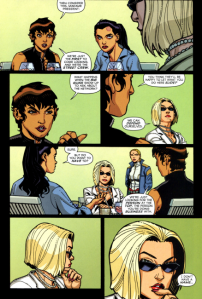 That’s largely due to Veronica Cale, the ruler of the island of mad scientists.  She knows Renee and Helena are spies, but figures she has more chance of finding out what they are up to over lunch than through torture.   And indeed, the women are forthcoming.  It becomes a clever bit of negotiating, convincing Veronica that it is in her interest to lead them to the head of the Network, rather than waiting for the big guns heroes to show up. 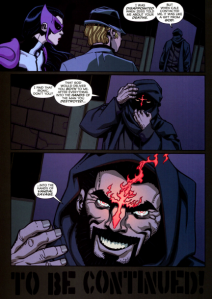 So Veronica sends them on to Syria, where they finally meet the man in charge.  Vandal Savage.