Detective 805 – Mr. Freeze gets a hug, and a strange Clayface

Mr. Freeze gets the attention in this chapter of City of Crime, appearing in Detective 805 (June 2005), by Lapham, Bachs and Massengil.

Batman defeats the host of masked attackers.  This is made much easier when they all turn to mud after being beaten.

The rest of the issue centres on Mr. Freeze, and his demented attempts to win the love of the girl he kidnapped. 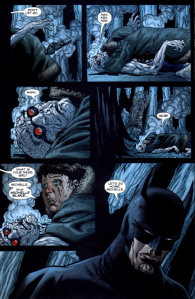 Ironically, she is the one who is able to defeat him.  She hugs him, and her body heat causes him to pass out, although he begs her to keep hugging him.

The story just keeps on going though, continuing in the next issue. 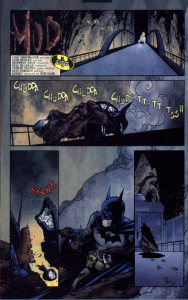 Far more entertaining is the back-up tale, by Kimo Temperance and Zach Howard.  Even though it, too, gets a “before War Games” sticker. 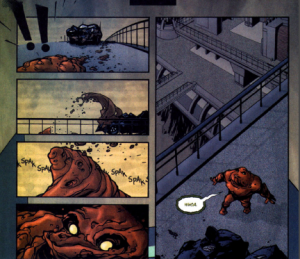 Batman returns to the cave after plowing his car through a Clayface he describes as being unusually child-like, saying it’s much like a Bizarro Clayface.  He does not realize that running into it did not kill it.  Clayface thus finds himself in the cave.

It’s powers are different than the other ones – at one point he splits into a bunch of little Clayfaces, and is far more interested in amusing himself than in fighting Batman. 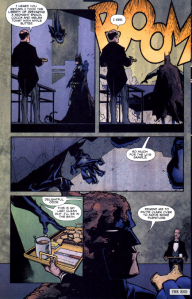 But the cave is not a playground, and the creature winds up defeating itself.  Cute, fun, and succinct.