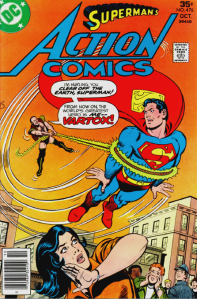 The Vartox/Karb-Brak story by Bates, Schaffenberger and Chiaramonte concludes in Action 476 (Oct. 77). 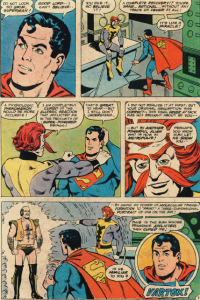 Karb-Brak has one more explosive blow-out in his fight with Clark Kent.  Clark uses heat vision to short out the lighting in the studio, and takes Brak with him out of the building.  Once the fight is done, Karb-Brak is sane and healthy again, his allergy drained off completely by Vartox.  It’s the first moment Superman realizes the other man is even on Earth. 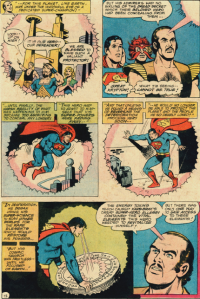 Vartox has had his powers restored as well by Brak’s outburst of energy, but it has messed with his mind.  He recounts his own actions as if they were taken by Superman, and even sort of confesses how little he cared about Brak’s life and safety, although again he ascribes all this to Superman.  Vartox leads Brak in attacking the hero. 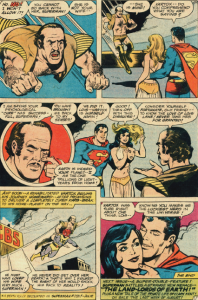 Superman manages to hold off the two, and contacts Lois Lane, who dresses up as Vartox’s dead wife.  The sight of her snaps his mind back, and he calms down.  But everyone apologizes to each other, and all is well.  Vartox takes Karb-Brak back to his homeworld in Andromeda, and heads back to his own planet.

This is the last we see of Karb-Brak,but Vartox returns in a couple of years.

Bates, Schaffenberger and Chiaramonte bring back Vartox, the hero of a far-off world, in Action 475 (Sept. 77).  Vartox had debuted in the pages of Superman a couple of years earlier, this marks his second appearance. 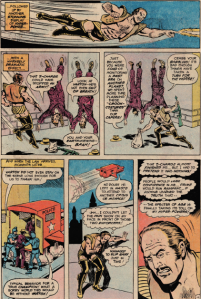 Vartox is operating as the hero of his world, but he finds his powers weakening.  He considers asking advice from Superman, and scans Earth, but finds something even more interesting.

Vartox learns of Karb-Brak and his ailment, and speculates that his allergic reaction could recharge Vartox’s failing powers. He heads to Earth, but keeps out of sight.  Karb-Brak mistakenly assumes that it is Superman who caused his flare up. 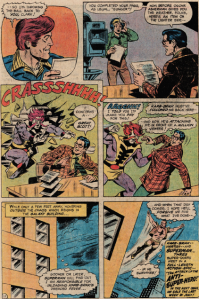 Karb-Brak even attacks a second time, while Clark is giving a live broadcast.  Vartox is hovering just outside the building, and caused this allergic reaction on purpose.  Not very nice for a hero.

Lori Lemaris gets, I believe, the only solo story she ever got, by Elizabeth Smith, Win Mortimer and Frank Chiaramonte, in this issue.  It comes quite out of the blue.  The last time Lori Lemaris appeared was in the Virus X storyline, almost ten years earlier. 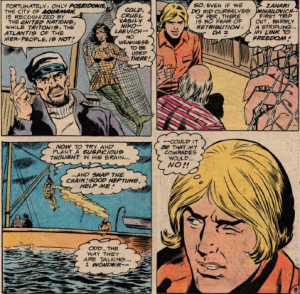 Lori gets caught by a Russian trawler, illegally fishing.  She uses her telepathic powers to turn the crew against each other.  We find out that only Aquaman’s city of Poseidonis is recognized by the United Nations.  The mermaid city of Tritonis has no legal standing. 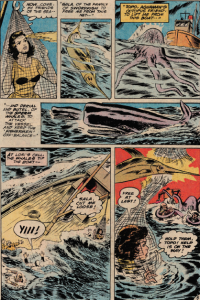 Lori also summons a number of sea creatures to help her escape by capsizing the boat, including Aquaman’s “pet” octopus, Topo.

It’s a good outing for a character that has never had a solo story before.  And Lori did not have to wait nearly so long for a return, appearing the following month in the Superman Super-Spectacular. 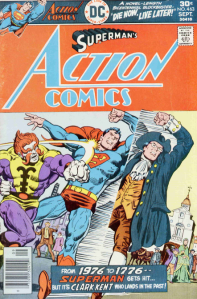 Bates, Swan and Blaisdel conclude the Karb-Brak story in Action 463 (Sept. 76).  Released in late June of 1976, it made the most of the Bicentennial fervor.

Although it resolves the Karb-Brak storyline in its; last few pages, the bulk of the story takes place in Philadelphia, in advance of the signing of the Declaration of Independence.

Swan’s art is superb on the historical stuff.  Clark has no memory of any powers, or being from another era, thanks to Karb-Brak.  But his natural inclination to helping people starts to reveal his abilities.

It’s not long before he stumbles across a plot to disrupt the signing and steal the document.

With his memory back, he returns to the present, and captures the ailing alien.  Superman operates on him, curing his allergy, and sealing him in his human form, with no memory of being anyone else.

About the happiest ending it could have.

Action 462 – Superman beats on a dying man, and Krypto eats the can 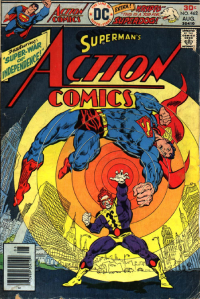 Superman is not sure what to do about the very allergic alien, but he isn’t going to leave Earth because of him.  The disease moves into its second phase, and begins causing warping of people and matter around him. 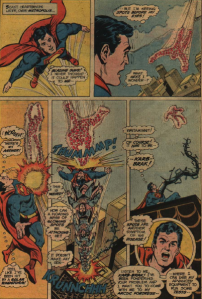 The next phase reduces Karb-brak to a clump of flying blobs, as he approaches death.  He does manage to get Superman spinning around, and adds to his momentum, which removes Superman from this time period. 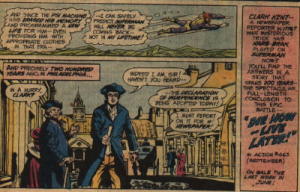 Karb-Brak doesn’t much care where Superman is, as long as he is fine.  But we see Clark on the streets of revolutionary Philadelphia.

Bridwell, Swan and Al Milgrom give Krypto his first solo story in about five years in this issue. 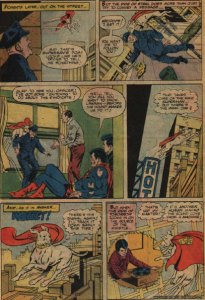 Krypto comes to Earth, searching for Superman, who has called for him.  He finds a phony, working as muscle in a protection racket, but gets rid of him.

Krypto has been asked to be in a dog food ad, with the proceeds going to charity, so Superman called for him.  Pimping our your dog, ok.  Krypto prefers the can to the food, in a moment I liked.

Karb-Brak is on the verge of attacking Steve Lombard comes flying in to intercept the alien.  This does prove that Steve is not Superman, and Brak takes advantage of an explosive touch he has to escape.

Back home, Karb-Brak concludes that Superman must be his other suspect, Clark kent.  He then uses a machine to alter the minds of  Lois Lane, Jimmy Olsen, Steve Lombard and Morgan Edge, to make them idolize Clark.  From them, he moves on to affect the larger population.

The result is kind of humourously absurd.  Brak beats up on Clark in front of a crowd who continue to root for him.  Clark holds back, both to maintain his identity and for the safety of the onlookers.

Superman does get the best of the ailing alien.  Supreman destroys the machine affecting people’s minds, but the issue ends with a great speech by Karb-Brak.  We knew he was ill, but Superman didn’t.  Now he learns that just by being around, he is killing Karb-Brak. 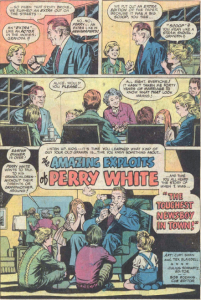 Perry White gets a solo back-up, a “private life” tale, told to his grandchildren after a family dinner, in this story by Bob Rozakis, Curt Swan and Tex Blaisdel.

Alie White has a cameo on the first page.

Action 460 – Steve Lombard is Superman?, and a Mr. Mxyzptlk tale

Action 460 (June 1976) was the third issue of the series that I bought.  It is the beginning of a four-part story, which made me buy the next three issues, and got me buying the series regularly. 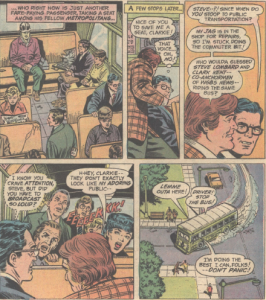 The story, by Bates, Swan and Blaisdel, begins in a very low-key manner, with Clark Kent riding the bus to work.  Steve Lombard winds up in the same coach, his sports car in the shop.  But neither man is prepared when a glowing alien being suddenly shows up in the back of the bus.

This creature is clearly none too find of Superman, and appears almost equally matched in strength.  He vanishes in the middle of the fight, and Superman is pretty sure that he turned back into whatever human guise he had been using on the bus, before he transformed. 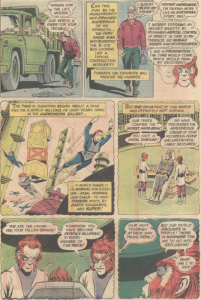 Superman is dead on about that.  This is Karb-Brak, from a planet in the Andromeda galaxy.  He is fatally allergic to all of his people, and was sent to live on Earth, just in order to survive.  His human guise is a construction worker, Andrew Meda.  Superman evokes the same allergic reaction that Andromedans did, so Brak decides he must kill Superman to save himself.

He tracks the energy, and sees Clark Kent and Steve Lombard working out together in the WGBS gym.  He starts to transform, but does not notice Clark take off and become Superman.  Assuming Lombad must be Superman, he breaks in to kill him. 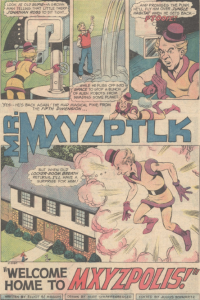 Though this is billed as a Mr. Mxyzptlk story, the real star of it is the recently introduced Jon Ross, whom Mxyzptlk chooses to pester.

Jon has heard about the imp.  After Mxyzptlk turns Pete Ross into a statue, Jon decides to play along with him, pretending to enjoy it all, and bide his time. 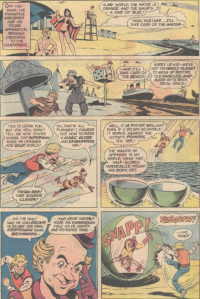 Mr. Mxyzptlk genuinely enjoys having a partner in his lunacy, and is unprepared when Jon traps him in a creation of his own making, which he cannot escape from, short of returning to his home dimension.

So this is kind of like a “private life of Jon Ross.”